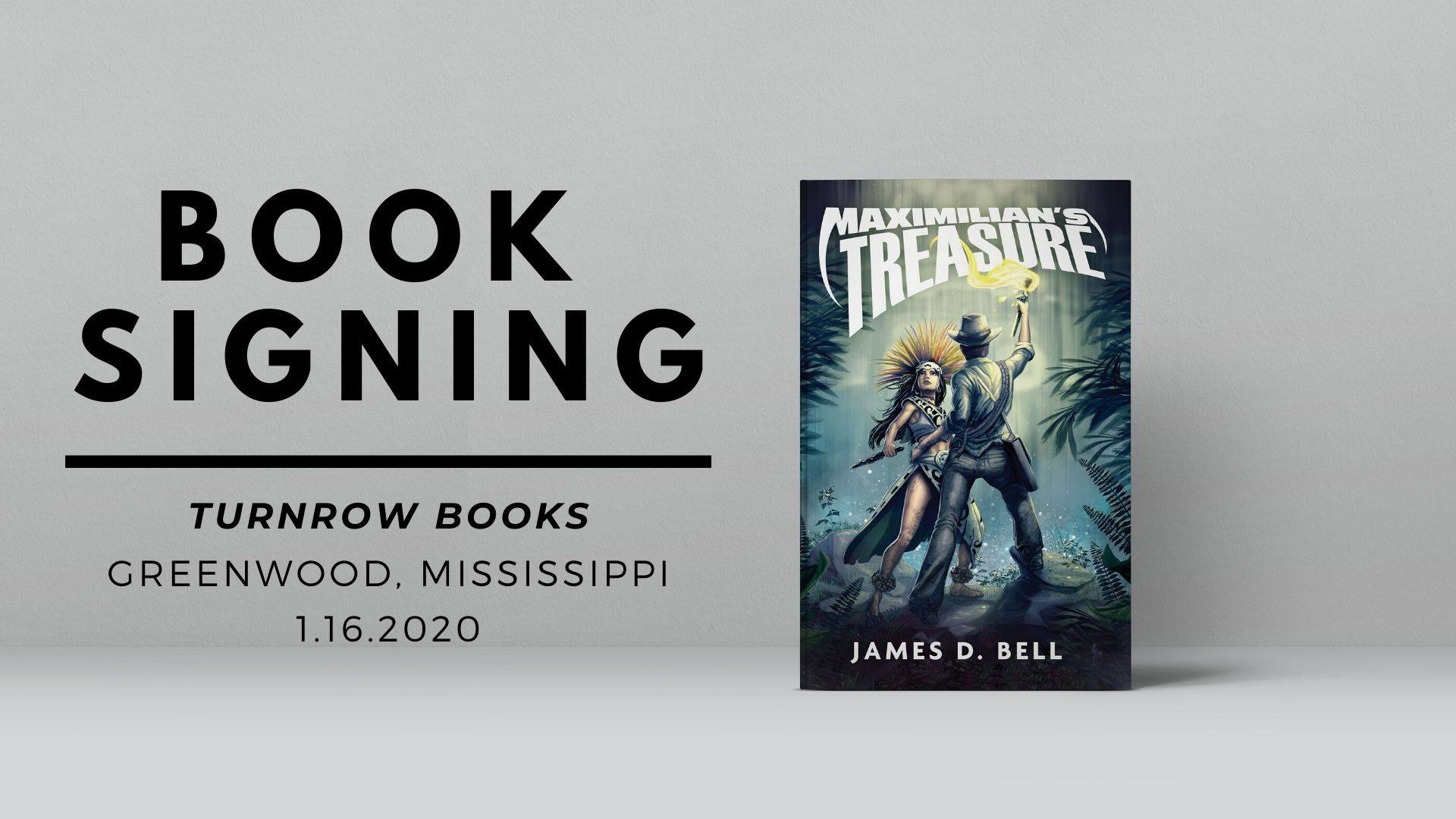 Join award-winning author James D. Bell on Thursday, January 16, 2020 from 4:30 - 6:30 p.m. at Turnrow Books in Greenwood, Miss. Judge Bell will be signing copies of his latest novel, "Maximilian’s Treasure," followed by a reading from the book.

Award winning novelist James D. Bell is back with a big, bold, briskly paced blockbuster in his latest novel, Maximilian’s Treasure. An epic tale that unfolds against the backdrop of a ticking clock, Maximilian’s Treasure follows Mississippi lawyers John Brooks and Jackson Bradley as they launch a pulse-quickening quest that spans from a Mississippi courtroom to the deep heart of a Central American jungle to the crystal clear waters of the Caribbean.

About Maximilian’s Treasure: Just days after their dramatic courtroom victory in their much-heralded “Case of the Century,” John Brooks and Jackson Bradley find themselves embroiled in an even bigger case. And this time the stakes are even higher, more dangerous…and more deadly.

When the beloved patriarch of a Choctaw family is murdered in a drive-by shooting during a gathering on the family farm, his distraught grandson pursues the murderers. But when three suspects are found dead on the family farm, the grandson is charged with murder. As the grisly, lurid, and sensational details of the murder come to light, the case takes an unexpected twist. And that twist captures the imagination of the media.

Expecting the resumption of Wild West range wars, press from the world over descend upon tiny Philadelphia, Mississippi. With tempers boiling and tensions reaching a fever pitch, John and Jackson must work tirelessly not only to defend against the criminal changes, but to protect the family’s farm, which is in grave danger of being taken away. Swirling rumors that a vast treasure is hidden on the farm plunge John and Jackson into a dangerous vortex –and smack dab in the middle of a deadly power struggle that spans centuries and continents. But just when John needs him most, Jackson leaves in pursuit of the treasure. As John becomes increasingly mired in the court proceedings, Jackson pursues a trail of clues that lead from Mississippi to a sunken Caribbean wreck, to a hidden jungle valley in Chiapas.

With so much hanging in the balance—and danger at every turn—John Brooks and Jackson Bradley will face the ultimate battle. And this battle could not only cost them all they hold dear: it could cost them their lives.

“I couldn’t find out soon enough or read fast enough to know what was going to happen ...”
– Long and Short Reviews

“Full of intrigue and suspense, MAXIMILIAN'S TREASURE delivers a fun read that will have you asking what comes next.”
– Cyrus Webb, Amazon Top 500 Reviewer

James D. Bell is a retired Judge who received the highest bar association approval ratings ever given to a Mississippi Circuit or County Judge. He is the author of the award-winning suspense novel Vampire Defense. Bell also contributed a short story to Mardi Alley’s Dog Stories for the Soul, alongside such notables as Willie Morris, Mark Twain and John Steinbeck. James D. Bell lives in the Jackson, Mississippi area.

Rumors of a legendary treasure trigger a battle over possession of a Choctaw family farm. Two young lawyers, John Brooks and Jackson Bradley, agree to help the family keep their farm. Early legal success prompts the drive-by murder of the patriarch of the family. The grandson chases the suspects whose bodies are found on the farm, scalped.