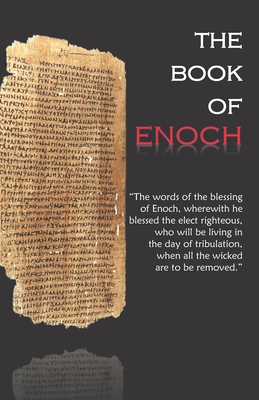 The Book of Enoch is an ancient Hebrew apocalyptic religious text, ascribed by tradition to Enoch, the great-grandfather of Noah. Enoch contains unique material on the origins of demons and giants, why some angels fell from heaven, an explanation of why the Genesis flood was morally necessary, and prophetic exposition of the thousand-year reign of the Messiah.The older sections (mostly in the Book of the Watchers) of the text are estimated to date from about 300-200 BC, and the latest part (Book of Parables) probably to 100 BC. Various Aramaic fragments found in the Dead Sea Scrolls, as well as Koine Greek and Latin fragments, are proof that the Book of Enoch was known by Jews and early Christians. This book was also quoted by some 1st and 2nd century authors as in the Testaments of the Twelve Patriarchs. Authors of the New Testament were also familiar with some of the content of the story. A short section of 1 Enoch (1:9) is cited in the New Testament Epistle of Jude, Jude 1:14-15, and is attributed there to "Enoch the Seventh from Adam" (1 En 60:8), although this section of 1 Enoch is a midrash on Deuteron 33:2. Several copies of the earlier sections of 1 Enoch were preserved among the Dead Sea Scrolls.Wikipedia, The Book of Enoch, 25th September 2020This book reprints R. H. Charles' 1917 translation.