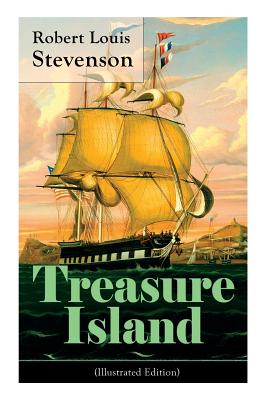 Treasure Island is an adventure novel by Scottish author Robert Louis Stevenson, narrating a tale of "buccaneers and buried gold". Stevenson conceived of the idea of Treasure Island (originally titled, "The Sea Cook: A Story for Boys") from a map of an imaginary, romantic island idly drawn by Stevenson and his stepson on a rainy day in Braemar, Scotland. Plot: An old sailor, calling himself "the captain" comes to lodge at the Admiral Benbow Inn on the west English coast during the mid-1700s, paying the innkeeper's son, Jim Hawkins, a few pennies to keep a lookout for a one-legged "seafaring man." A seaman with intact legs shows up, frightening Billy - who drinks far too much rum - into a stroke, and Billy tells Jim that his former shipmates covet the contents of his sea chest. After a visit from yet another man, Billy has another stroke and dies; Jim and his mother (his father has also died just a few days before) unlock the sea chest, finding some money, a journal, and a map. The local physician, Dr. Livesey, deduces that the map is of an island where a deceased pirate - Captain Flint - buried a vast treasure. The district squire, Trelawney, proposes buying a ship and going after the treasure, taking Livesey as ship's doctor and Jim as cabin boy.... Robert Louis Stevenson (1850 - 1894) was a Scottish novelist, poet, essayist, and travel writer. His most famous works are Treasure Island, Kidnapped, and Strange Case of Dr Jekyll and Mr Hyde. A literary celebrity during his lifetime, Stevenson now ranks among the 26 most translated authors in the world.