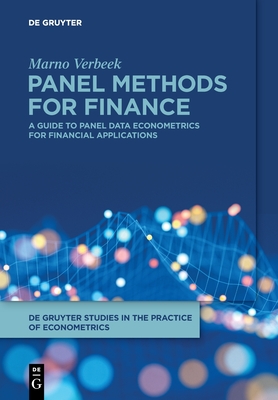 By Marno Verbeek
$45.99
Not Yet Published

Financial data are typically characterised by a time-series dimension and a cross-sectional dimension. For example, we may observe financial information on a group of firms over a number of years, or we may observe returns of all stocks traded at NYSE over a period of 120 months. Accordingly, econometric modelling in finance requires appropriate attention to these two -- or occasionally more than two -- dimensions of the data. Panel data techniques are developed to do exactly this. This book provides an overview of commonly applied panel methods for financial applications.

The use of panel data has many advantages, in terms of the flexibility of econometric modeling and the ability to control for unobserved heterogeneity. It also involves a number of econometric issues that require specific attention. This includes cross-sectional dependence, robust and clustered standard errors, parameter heterogeneity, fixed effects, dynamic models with a short time dimension, instrumental variables, differences-in-differences and other approaches for causal inference.

After an introductory chapter reviewing the classical linear regression model with particular attention to its use in a panel data context, including several standard estimators (pooled OLS, Fama-MacBeth, random effects, first-differences, fixed effects), the book continues with a more elaborate treatment of fixed effects approaches. While first-differencing and fixed effects estimators are attractive because of their removal of time-invariant unobserved heterogeneity (e.g. manager quality, firm culture), consistency of such estimators imposes strict exogeneity of the explanatory variables (for a finite number of time periods). This is often violated in practice, for example, some explanatory variable explaining firm performance may be partly determined by historical firm performance. An obvious case where this assumption is violated arises when the model contains a lagged dependent variable. A separate chapter will focus on dynamic models, which have received specific attention in the literature, also in the context of financial applications, like the dynamics of capital structure choices. Estimation mostly relies on instrumental variables or GMM techniques. Identification and estimation of such models is often fragile, and the small sample properties may be disappointing.

The book continues with a chapter on models with limited dependent variables, including binary response models. The cross-sectional dependence that is likely to be present complicates estimation, and the author discusses pooled estimation, random effects and fixed effects approaches, including the possibility to include lagged dependent variables. This chapter will also discuss problems of attrition and sample selection bias, as well as unbalanced panels in general.