Skerry Island: The Prince and the Pirate Book One (Paperback) 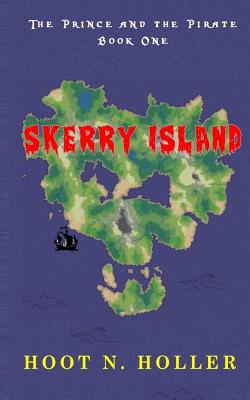 WILL THEY FIND THE TREASURE OR BE CAPTURED BY PIRATES? When King Manuel of Oro announces his ten-year-old son's crowning ceremony, Leo's world crumbles. He doesn't want to be a stuffy old prince He wants to be free to have adventures, roam the kingdom, and spar with the crew of the royal navy. As he dreads the upcoming ceremony, Leo longs to have one final adventure before taking on his royal duties. His wish comes true when the ship he's on is taken over by pirates He is furious when he discovers that his pesky younger sister, Nina has followed him and is also trapped on board. When a young pirate, Duke, who is just a boy Leo's age, warns them to abandon the ship quickly, they persuade Duke to join them. The kids escape to a nearby island and discover a treasure map. After arguing about what to do with the map, they ultimately set out to find their riches. They brave the dangers of the jungle and angry pirates on this wild adventure seeking the island's hidden treasure. If you are looking for adventure books for children ages 6 to 10, look no further This action-packed adventure is also an inspiring family book - it's a treat for parents and little ones alike. We all know how inspiring children's books can be. Skerry Island is sure to stay in your hearts and minds for years to come, and features: - A story of enchantment and adventure
- Astounding character artwork
-Stunning illustrations Very good read for young children. Good story and easy for them to follow.- A Reader ABOUT THE AUTHOR Hoot N. Holler is a daughters/mother writers/illustrator team. Hoot, the funny one spends her free time scribbling green and purple ink all over Holler's words. N., the illustrator, is completely immersed in Tamriel. Holler is aptly named; especially during a UMD game.