The Cradle Will Fall: A Novel (Mass Market) 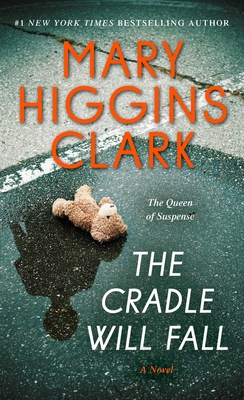 A minor road accident landed county prosecutor Katie DeMaio in Westlake Hospital. That night, from her window, she thought she saw a man load a woman’s body into the trunk of a car...or was it just a sleeping pill induced nightmare? At work the next day, Katie began investigating a suicide that looked more like murder. Initial evidence pointed elsewhere, but medical examiner Richard Carroll saw a trail leading to Dr. Edgar Highley. He suspected that the famous doctor’s work “curing” infertile women was more than controversial—that it was deceitful, depraved, and often deadly. But before Richard could tell Katie his fears, she left the office for the weekend and an appointment for routine surgery...in Dr. Highley’s operating room.

The #1 New York Times bestselling author Mary Higgins Clark wrote forty suspense novels, four collections of short stories, a his­torical novel, a memoir, and two children’s books. With bestselling author Alafair Burke she wrote the Under Suspicion series including The Cinderella Murder, All Dressed in White, The Sleeping Beauty Killer, Every Breath You Take, and You Don’t Own Me. With her daughter Carol Higgins Clark, she coauthored five more suspense novels. More than one hundred million copies of her books are in print in the United States alone. Her books are international bestsellers.