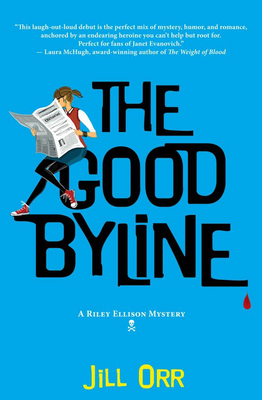 This is book number 1 in the Riley Ellison Mysteries series.

Meet Riley Ellison, a smart, quirky, young library assistant who's become known in her hometown of Tuttle Corner, Virginia, as Riley Bless-Her-Heart. Ever since her beloved granddaddy died and her longtime boyfriend broke up with her, Riley has been withdrawing from life. In an effort to rejoin the living, she signs up for an online dating service and tries to reconnect with her childhood best friend, Jordan James, a reporter at the Tuttle Times. But when she learns that Jordan committed suicide, Riley is shaken to the core. Riley agrees to write Jordan's obituary as a way to learn more about why a young woman with so much to live for would suddenly opt out. Jordan's co-worker, a paranoid reporter with a penchant for conspiracy theories, convinces Riley that Jordan's death was no suicide. He leads her down a dangerous path toward organized crime, secret lovers, and suspicious taco trucks. Riley's serpentine hunt for the truth eventually intersects with her emerging love life, and she makes a discovery that puts everything Riley holds dear--her job, the people she loves, and even her life--in danger. Will writing this obituary be the death of her?
Jill Orr is the author of the Riley Ellison mystery series, which has been called "delightfully comic" and "highly amusing" by Publishers Weekly. Books in the series have garnered praise from industry professionals and readers alike and have earned a Silver Falchion nomination, a starred review and Best Book of the Week from Library Journal, and a Midwest Connections pick.Originally from Chicago, Jill moved to Columbia, Missouri, to attend the University of Missouri, where she received her bachelor's degree in Journalism and her master's degree in Social Work. However, these days the only social work she does is at cocktail parties, and she sometimes wishes her degrees were in What's for Dinner and Decoding the Teenage Eye Roll.Jill lives in Missouri with her husband and two (usually delightful) teenage children. The fourth installment in the Riley Ellison series, The Full Scoop, is new for 2020. And Jill's new illustrated nonfiction humor book, How Not to Be Old (Even if You Are), arrives in November. Learn more at www.jillorrauthor.com.