Journey to the Center of the Earth: (annotated) (Worldwide Classics) (Paperback) 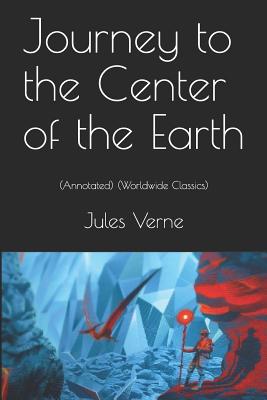 Journey to the Center of the Earth (French: Voyage au centre de la Terre, also translated under the titles A Journey to the Centre of the Earth and A Journey to the Interior of the Earth) is an 1864 science fiction novel by Jules Verne. The story involves German professor Otto Lidenbrock who believes there are volcanic tubes going toward the centre of the Earth. He, his nephew Axel, and their guide Hans descend into the Icelandic volcano Sn fellsj kull, encountering many adventures, including prehistoric animals and natural hazards, before eventually coming to the surface again in southern Italy, at the Stromboli volcano.The genre of subterranean fiction already existed long before Verne. However, Journey considerably added to the genre's popularity and influenced later such writings. For example, Edgar Rice Burroughs explicitly acknowledged Verne's influence on his own Pellucidar series.