Mary's Voice in the Gospel According to John: A New Translation with Commentary (Hardcover) 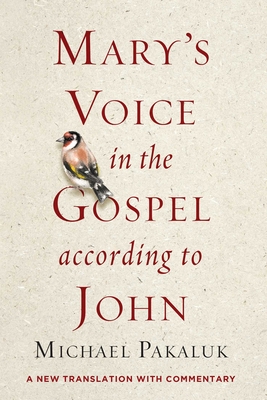 A New Light on John’s Gospel

The Gospel according to John has always been recognized as different from the “synoptic” accounts of Matthew, Mark, and Luke.

But what explains the difference?

In this new translation and verse-byverse commentary, Michael Pakaluk suggests an answer and unlocks a twothousand-year-old mystery. Mary’s Voice in the Gospel according to John reveals the subtle but powerful influence of the Mother of Jesus on the fourth Gospel.

In his dying words, Jesus committed his Mother to the care of John, the beloved disciple, who “from that hour . . . took her into his own home.” Pakaluk draws out the implications of that detail, which have been overlooked for centuries.

In Mary’s remaining years on earth, what would she and John have talked about? Surely no subject was as close to their hearts as the words and deeds of Jesus. Mary’s unique perspective and intimate knowledge of her Son must have shaped the account of Jesus’ life that John would eventually compose.

With the same scholarship, imagination, and fidelity that he applied to Mark’s Gospel in The Memoirs of St. Peter, Pakaluk brings out the voice of Mary in John’s, from the famous prologue about the Incarnation of the Word to the Evangelist’s closing avowal of the reliability of his account.

This remarkably fresh translation and commentary will deepen your understanding of the most sublime book of the New Testament.

MICHAEL PAKALUK is a professor of ethics and social philosophy in the Busch School of Business at the Catholic University of America in Washington, D.C., and a member of the Pontifical Academy of St. Thomas Aquinas. He earned his undergraduate and doctoral degrees at Harvard and studied as a Marshall Scholar at the University of Edinburgh. An expert in ancient philosophy, he has published widely on Aristotelian ethics and the philosophy of friendship and done groundbreaking work in business ethics. His previous books include Other Selves: Philosophers on Friendship, The Appalling Strangeness of the Mercy of God, and most recently The Memoirs of St. Peter: A New Translation of the Gospel according to Mark. He lives in Hyattsville, Maryland, with his wife, Catherine Pakaluk, a professor of economics, and their eight children.

“It is a rare scholar who can make the most familiar ancient text feel like it was just discovered. . . . I felt like I was reading Saint John for the first time.”

“Michael Pakaluk has put vast learning and formidable skills as a biblical translator and exegete in service of an urgent Christian task. . . .”

—SOHRAB AHMARI, author of the forthcoming The Unbroken Thread: Discovering the Wisdom of Tradition in an Age of Chaos

“A blend of poetic sensibility, spirituality and scholarship that is a genuine surprise and inspiration.”

—FATHER DWIGHT LONGENECKER, parish priest and author of The Mystery of the Magi and Immortal Combat

“Mary’s Voice in the Gospel according to John is boldly beautiful, deeply literate, and astonishingly fresh.”

“By the book’s closing pages, it would be difficult indeed to imagine that Mary had not influenced John’s work.”

“This is a rare kind of scholarship, both enlightening and fascinating.”