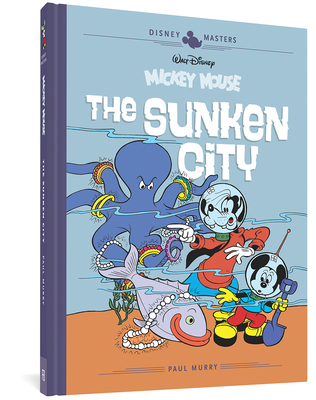 Mickey and Goofy are lost at sea, and they get caught in a pitched battle between buccaneer Pete and sneaky submarine commander Captain Grapple. At stake: the ancient gold of Port Rancid, a pirate stronghold that sank beneath the waves — and is now guarded by a pack of very jealous sea monsters! Then, Mickey and Goofy have their hands full with a host of mystery puzzlers — from canoe-going ghosts in "Legend of Loon Lake" to hi-tech arsonists in "The Phantom Fires" to a piratical parrot in "The Castaways of Whale Bay!"

Paul Murry (1911–1989) was a Disney comic book artist who most notably worked on the Mickey Mouse serials of the 1950s, '60s, and '70s for Dell Publishing and Gold Key Comics. Previously, he worked as an assistant at Walt Disney Animation Studios, where he contributed to projects such as Pinocchio and Dumbo, among others. He also made a name for himself as a gag cartoonist and illustrated a number of Woody Woodpecker comic books.