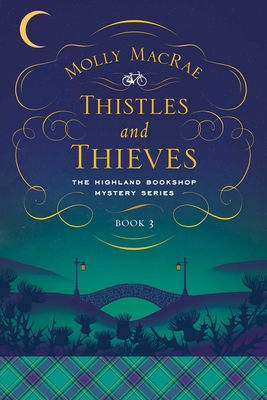 
Hard to Find
The latest entry in the charming Highland Bookshop mystery series finds the women of Yon Bonnie Books embroiled in the death of a local doctor, which sets off a chain of other curious—and deadly—events.

Out for a bicycle ride in the hills beyond Inversgail, Janet Marsh discovers the body of Dr. Malcolm Murray. The elderly Murray and his own bicycle went off the road and down a steep slope—he’s sprawled in the burn at the bottom, his damaged bike in a patch of thistles on the bank. Janet calls the Police Scotland emergency number. Tire tracks at the side of the narrow road suggest a vehicle might have been involved. But if it was an accident, the driver hasn’t come forward. And if it wasn’t an accident. . . . But who would want the well-loved, retired doctor dead?

A few days after the death, a box of vintage first editions is left on the doorstep of Yon Bonnie Books with a note: “Please look after these books. Thank you.” Janet and her crew at the shop are at first delighted, and then mystified—what exactly does “look after” mean? Are they free to sell them? And what are the odd notes penciled in the margins? With a little digging, the women decide the books might belong to Malcolm Murray or his reclusive brother, Gerald. When Janet and Christine call at Malcolm’s house, they find his confused, angry sister and evidence of a burglary. When they go to Gerald’s modest croft house, they find the door ajar and Gerald dead inside, stabbed with a regimental dagger.

While the police try to determine if the Murray brothers’ deaths are connected and who’s responsible, Janet and the bookshop owners try to find out how and why the box of books ended up on their doorstep. The police are interested in those questions, too, and they’re more than a little suspicious. Are the Yon Bonnie women as good with burglar tools as they are with books—and at finding bodies?
Molly MacRae is the national bestselling author of Plaid and Plagiarism, Scones and Scoundrels, Thistles and Thieves, and Heather and Homicide, all available from Pegasus Crime. Her short stories have appeared in Alfred Hitchcock Mystery Magazine for more than twenty years, and she has won the Sherwood Anderson Award for Short Fiction. Molly lives with her family in Champaign, Illinois.
"Enjoyable. The plot steadily gains momentum as it heads toward the satisfying ending. Well-drawn characters enhance the story line. Armchair travelers will have fun."
— Publishers Weekly

"A box full of old books may hold the secret to a mysterious death in a small Scottish town."
— Kirkus Reviews

"Cozy fans are in for a treat."
— Publishers Weekly [praise for the Highland Bookshop Mystery Series]

"Enough motives and suspects to provide plenty of twists and turns."
— Kirkus Reviews [praise for the Highland Bookshop Mystery Series]

"A new cozy mystery series in which the drama is tempered with humor."
— Marilyn Stasio