I Have To Call Someone Mama: A Grandmother's Story of Two Siblings Rescued from Munchausen by Proxy Abuse (Paperback) 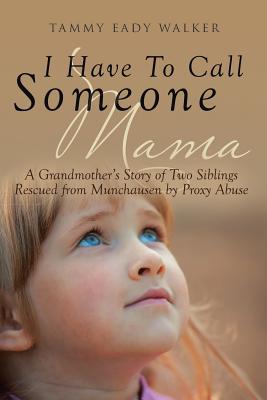 Her grandson was literally on the brink of death's door. From as early as one month old, he was gravely ill with one illness after another. By the time he was three years old, he had been hospitalized more times than she could count. He would get better and then suddenly relapse with no reasonable explanation. When her granddaughter was born, she too started having alarming health problems. She had known that her daughter-in-law seemed to exaggerate but never could she have imagined this.
The children's mother was so cunning and crafty in her manipulative deception that she fooled dozens of medical professionals along the way. After three years of her grandson being constantly sick with countless hospitalizations, this grandmother was faced with the horrifying realization; that her grandchildren were sick because their mother was making them sick. Then the real fight began.
Munchausen's Syndrome by Proxy is one of the cruelest forms of child abuse imaginable. It is very difficult to prove and even harder to prosecute. This story chronicles a woman's journey as she discovers that her two grandchildren are victims of this abuse that most people have never even heard of. Her faith in God kept her going as she turned their tragedies and trials into triumph. Follow her journey of faith as she fights to rescue, protect, and bring healing to her grandchildren's broken spirits and shattered little souls.