The Defense of the Rights and Interest of the Venezuelan State by the Interim Government Before Foreign Courts. 2019-2020 (Paperback) 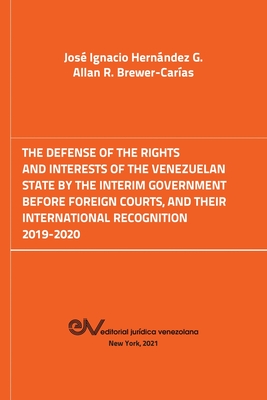 The Defense of the Rights and Interest of the Venezuelan State by the Interim Government Before Foreign Courts. 2019-2020 (Paperback)

This book of Professors Jos Ignacio Hern ndez and Allan R. Brewer-Car as, studies the legal implication derived from the recognition by several countries on January 23, 2019, of the speaker of the National Assembly of Venezuela as the Interim President of the country, acting according to the provisions of the "Statute that Governs the Transition to Democracy to Restore the Enforcement of the Constitution" issued by the same Assembly on February 15, 2019.

Because at that time Venezuela was involved in complex litigations in the United States based on claims filed by the legacy creditors, the political recognition of the Interim President become a question of law. Considering the precedents about government recognition and the act of state doctrine, the United States Judiciary accepted the Interim President as the exclusive representative of Venezuela and considered the decisions adopted by the National Assembly and the Interim President as valid and binding ones. The United Kingdom Judiciary adopted a similar decision. Accordingly, between 2019 and 2020, foreign courts derived legal and practical consequences from the political statements of recognitions issued since January 2019.

This book analyzed this case of such recognition during 2019 and 2020, not only from the Venezuelan Constitutional and Administrative Law perspective, but also from the general principles of government recognition in International Law as well as in the United States and the United Kingdom Law.