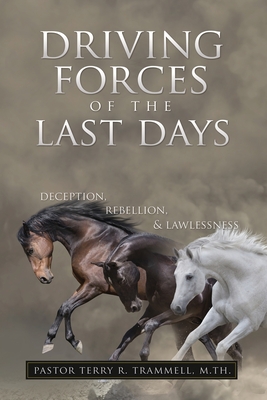 As I was on my way home from work this one day back in July, 1998, I felt as if The LORD JESUS was saying to me to write a book. I asked Him, "What should I call it?" He responded to me in my heart saying, "Driving Forces of The Last Days." I then asked Him saying, "What are they?" The LORD JESUS responded to me saying, "They are DECEPTION, REBELLION and LAWLESSNESS." This is a succinct description of the purpose of this book. All sin in The Last Days of human history can be summed in one of these three areas -- DECEPTION, REBELLION and LAWLESSNESS.
Pastor Terry R. Trammell has a Masters of Theology Degree from Christian Life School of Theology located in Columbus, GA where a campus was located in Spartanburg, SC. Terry was born in Union, SC where he graduated from Union High School in 1975. Terry is currently working on another project dealing with End-time Bible Prophecy. When the book has been proof-read, it too, can be sent to the publisher - Xulon Press, Maitland, FL. Terry is divorced after 15 years of marriage. He began his study of Bible Prophecy after hearing Perry Stone, Jr. from Cleveland, TN. preaching on Bible Prophecy in 1995. He considers Perry Stone as his mentor in the area of Bible Prophecy. Terry was a member of Omega Center International (OCI) where Perry ministers and hold Prophecy Conferences. He moved to Cleveland, TN from Spartanburg, SC to be a part of what Perry is doing. While in Cleveland, TN, Terry received his Pastoral Ordination License from United Christian Church in June, 2016. Now, with the move to Ohio, Terry can now operate in the Gifts of The Holy Spirit, which The LORD Jesus Christ has anointed him with--Faith, Word of Knowledge and Healing.