Twenty-Eight and a Half Wishes: A Rose Gardner Mystery (Paperback) 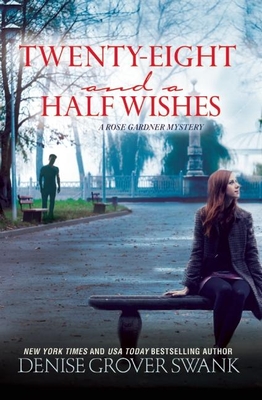 Twenty-Eight and a Half Wishes: A Rose Gardner Mystery (Paperback)

For Rose Gardner, working at the DMV is bad even before she has a vision of herself dead. She's had plenty of visions, but she's never seen herself before. When her overbearing momma winds up murdered instead of Rose, there's only one thing that's certain: Rose is the prime suspect.

With prison looming, Rose realizes she's wasted her life and makes a list on the back of a Wal-Mart receipt: twenty-eight things she wants to accomplish before everything falls apart. From getting cable TV to doing “more” with a man, Rose is well on her way to committing a good number of the seven deadly sins, with the help of her hot and mysterious neighbor Joe, who has plenty of dangerous secrets of his own.

When her house is broken into and someone else she knows is murdered, Rose realizes that dying in the county jail may not be her biggest worry after all in Denise Grover Swank's New York Times bestselling mystery debut.
Denise Grover Swank, author of mystery, contemporary romance, urban fantasy, and young adult series, lives in Lee’s Summit, Missouri. She has six children, four dogs, and an overactive imagination. She can be found dancing in her kitchen with her children, reading, or writing her next book.
Praise for the New York Times and USA Today bestselling series:

"Readers will root for the appealing heroine."
—Publishers Weekly

"TWENTY-EIGHT AND A HALF WISHES is a nice mix of darker elements with some lightheartedness as balance...the light tone and smooth prose keep the story moving."
—Noir Journal

"This was one of those books that I kept telling myself one more page, then I need to put it down. Instead I found myself tearing through the book instead, needing to know the outcome."
—Just Jump Book Reviews on Twenty-Eight and a Half Wishes

"Readers will enjoy this lighthearted romantic suspense novel with a dash of comedy. The characters are memorable, the pace is fast and the dialogue is witty."
—RT Book Reviews on Twenty-Nine and a Half Reasons