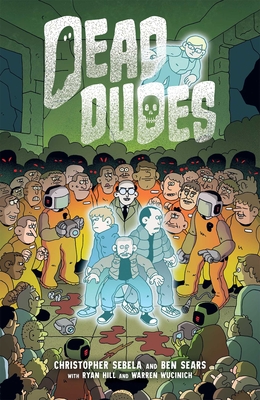 
Special Order - Subject to Availability
"Engaging and outrageous, this one is not to be missed." — BookList

Trev, Kent, and Brian are allegedly friends, but are best known as the backbiting hosts of the popular ghost hunting show, Ghost Bros. With ratings falling and competition rising, they gamble it all on the Chernobyl of haunted locations: Edgeway Penitentiary.

Armed only with a bag of cameras, some sick tattoos and absolutely zero scientific knowledge, the Ghostbros find conclusive proof of the afterlife at Edgeway... After they die and come back as ghosts themselves, trapped there with the angry ghosts who killed them!

A year later, as film crews arrive for an anniversary memorial special hosted by their most hated rivals, the Ghostbros have to be the best DEAD DUDES they can be, in order to prove to the world that ghosts exist (Oh yeah—and to save the living from a ghostly armageddon, but whatever).
Christopher Sebela is a four-time Eisner-nominated writer, designer, and publisher. He’s the co-creator of Crowded, Dead Dudes, Test, Heartthrob, and Shanghai Red, among others. He puts out his weirder work himself via a tiny publishing empire called Two Headed Press. Go see him at www.christophersebela.com
"Paranormal fun for readers who have imagined going behind the scenes of ghost-hunting shows."
— Kirkus Reviews

"Engaging and outrageous, this one is not to be missed."
— BookList