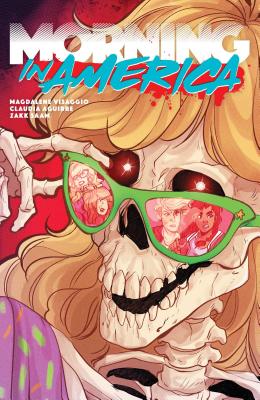 
Special Order - Subject to Availability
"Sharp, snarky and slick, Visaggio gives us a clever rewind to an unfolding mystery set in the early 80s." –– CHUCK WENDIG

It's 1983, and when mysterious monsters start overtaking a small town in Ohio, it's up to a teenage girl gang to save the day in this new story for fans of Paper Girls and Stranger Things.

Created by powerhouse team Magdalene Visaggio (Eternity Girl) and Claudia Aguirre (Kim & Kim), Morning in America follows the Sick Sisters, a group of friends and small-time delinquents who may be the only people standing between their suffocatingly small town and complete apocalyptic destruction. The Sisters know there's something wrong in Tucker, Ohio—and they also know that the authorities aren't doing anything about it. When the girls take the investigation into their own hands, they run into wild conspiracy theories, abandoned homes... and something that screeches in the night. At the end of the world, four girls with bikes and baseball bats are there to stand in the way.
Queer comic book artist and writer. GLAAD Award Nominee and Will Eisner Award nominee. Co-founder of Boudika Comics, where she self-publishes comics. Currently working for Black Mask, Oni Press, Legendary, Limerence Press and Boom! Studios.
"Sharp, snarky and slick, Visaggio gives us a clever rewind to an unfolding mystery set in the early 80s."
— Chuck Wendig, New York Times bestselling author of Star Wars: Aftermath

"Part Nancy Drew, part Stranger Things, part Sex Pistols, punk rock, MORNING IN AMERICA turns suburbia upside down with beautiful art and characters that jump off the page. The end of the world is here, and it's a damn good book."
— Bryan Hill (author of Postal)