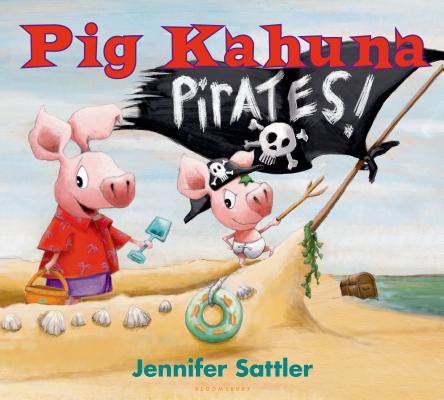 Our favorite porcine-brother duo is back in another kid-friendly seashore adventure.

Fergus and Dink love playing at the beach. But when Dink wakes up from his nap in a crabby mood, it's up to big brother Fergus to pull him out of it. Does the little fella want to take a swim? Build a sand castle? Have a juice box? Aaargh! Only one thing will tame the tantrum - when Fergus invites Dink to play with his new pirate ship of sand, and gives him the starring role as pirate captain. Sometimes it feels right to squint your eyes and act like a scurvy dog of a pirate. And with a little brotherly love, you might even forget what was so terrible in the first place…

Jennifer Sattler is the creator of the picture books A Chick 'n' Pug Christmas, Chick 'n' Pug, Chick 'n' Pug Meet the Dude, Pig Kahuna, Pig Kahuna Pirates!, and Sylvie. She is married and has two children and two dogs, both of which are part basset hound and thus aspire to be much bigger dogs than they really are. She lives in New York.
www.jennifersattler.com

“Sattler excels at creating just the right facial expressions to match the humor of the text and provide insight into the brotherly dynamic.” —School Library Journal

“The full-color acrylic and colored pencil illustrations have a sketchy, active feel that bounces merrily along and keeps the focus squarely on the expressive porcine pair.” —School Library Journal, starred review, on Pig Kahuna

“You almost hear the seashore when you read the book: Now that's a summer read.” —Time Out New York Kids on Pig Kahuna