Wounded Lord: Reading John Through the Eyes of Thomas: A Pastoral and Theological Commentary on the Fourth Gospel (Paperback) 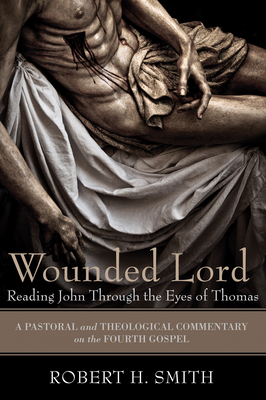 Description: John's gospel does not record "Thomas's doubt," as later generations of Christians have branded the story. Rather, John presents Thomas's faith. In this work, Robert H. Smith approaches Thomas as one who believes in the reality of incarnation: God has a body. Too often, Smith argues, Christians read John's gospel for its lyrical discourses. The resulting portrait of Jesus is a "cross-less Christ," a portrait that contributes powerfully to Christian triumphalism. In contrast, Smith finds that the evangelist always has the cross in view. Smith reads John "backwards," through the eyes of Thomas. In so doing, he demonstrates the centrality of a wounded Lord in the theology of the gospel. But this book does not end with hermeneutics. Smith advances his discussion into the life of discipleship. Anyone dwelling in Christ's body will be similarly marked. What does it mean to live in the world as the marked body of Christ? Everyone who poses the question will want to read this book. Martha E. Stortz Professor of Historical Theology and Ethics Pacific Lutheran Theological Seminary/The Graduate Theological Union Berkeley, California Endorsements: "Always an innovative teacher and writer, Smith trumps all that in his final book. He finds in Thomas's plea to see Jesus's wounds precisely what John's Gospel wants us to see: a God who became incarnate in Jesus, wounds and all. This gospel is not saying, according to Smith, 'Jesus is like (the almighty) God', but that 'God is like this wounded Jesus.' When I used Robert's ideas recently to end a gospels course, one student said, in effect, 'You have kept the best teaching until now.'" --Everett R. Kalin Christ Seminary Lutheran Theological Seminary, Berkeley "In Wounded Lord we find Robert Smith's last testament, a meditation on his favorite gospel. Renouncing all moralizing, ethnocentrism, and religious triumphalism, Smith focuses on Jesus's self-sacrificing love as the clue to God's nature and as power to heal all divisions. This is a book for everyone to reencounter John's Jesus, whose glory was to give self away so that all humanity might even now be one with him 'in the lap of the Father.'" --Gary Pence Pacific Lutheran Theological Seminary "From the beginning of my pastoral ministry, I have relied on Robert H. Smith for cogent, pertinent, and deep reflection on Christian scriptures . . . Is he correct that the whole of the book needs to be refracted through the Thomas story, that the risen Christ always and necessarily bears the wounds of crucifixion? I believe so, and you ought to read the book to consider the question yourself. It will bless your devotional practice, your teaching and preaching, and your understanding of God's suffering for and with us." --Rev. Brian Stein-Webber Trinity Lutheran Church, Oakland, California About the Contributor(s): Robert H Smith (1932-2006), was professor of New Testament at Pacific Lutheran Theological Seminary and served as a member of the core doctoral faculty of the Graduate Theological Union in Berkeley, California. He is the author of Apocalypse: A Commentary on Revelation in Words and Images (2000), and Easter Gospels: The Resurrection of Jesus According to the Four Evangelists (1983) He has published commentaries on Matthew (1989), Acts (1970), and Hebrews (1984). He co-authored several books with Paul Fullmer, Read Greek by Friday (Wipf &Stock, 2004), Read Greek by Friday: The Gospel of John & 1 John (Wipf & Stock, 2005), Greek at a Glance (Wipf & Stock, 2007).