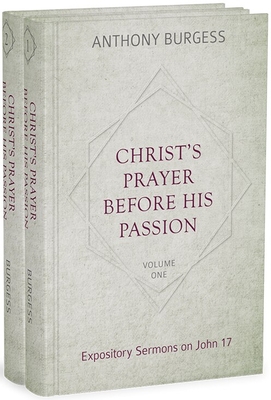 In Christ's Prayer before His Passion , a major work consisting of 145 sermons, Anthony Burgess expounds such topics as God the Father and God the Son, the love of God, providence over death, election, the deity of Christ, the Mediator as teacher and priest and king, union with Christ, the knowledge of God, eternal life, justification, sanctification, obedience, separation from the world, faith, prayer, perseverance, worship, Christian unity, gospel ministry, and the glory of heaven. All these truths are discussed by this judicious Puritan divine according to the order of the text in John 17.

Burgess rightly regarded John 17 as a mountaintop of divine revelation, "a pearl in the gold" of the Bible. He asserts that the Lord offers this prayer in the presence of His disciples so that those who hear it (and later, those who read it) might be filled with joy. This prayer is especially significant because Jesus utters it the night before His crucifixion, which is the climax of His earthly work. Burgess thus asks his readers, "If the words of a dying man are much to be regarded, how much more of a dying Christ?" In this light, Anthony Burgess expounds John 17 as the prayer of Christ, both as our Mediator--if we are believers--and as the model of a godly man.

Originally published as CXLV Expository Sermons upon the Whole 17th Chapter of the Gospel according to John: or, Christ's Prayer before His Passion Explicated, and both Practically and Polemically Improved (London: Abraham Miller for Thomas Underhill, 1656).

Anthony Burgess (d. 1664) was a member of the Westminster Assembly and pastor of the church of Sutton Coldfield in Warwickshire.