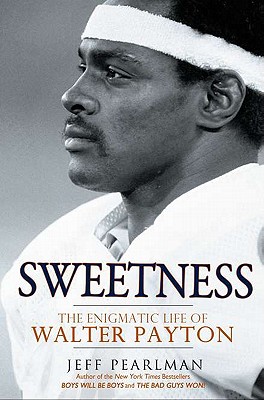 At five feet ten inches tall, running back Walter Peyton was not the largest player in the NFL, but he developed a larger-than-life reputation for his strength, speed, and grit. Nicknamed "Sweetness" during his college football days, he became the NFL's all-time leader in rushing and all-purpose yards, capturing the hearts of fans in his adopted Chicago.

Crafted from interviews with more than 700 sources, acclaimed sportswriter Jeff Pearlman has produced the first definitive biography of Payton. "Sweetness" at last brings fans a detailed, scrupulously researched, all-encompassing account of the legend's rise to greatness. From Payton's childhood in segregated Mississippi, where he ended a racial war by becoming the star of his integrated high school's football team, to his college years and his twelve-year NFL career, "Sweetness" brims with stories of all-American heroism, and covers Payton's life off the field as well. Set against the backdrop of the tragic illness that cut his life short at just forty- six years of age, this is a stirring tribute to a singular icon and the lasting legacy he made.

Jeff Pearlman is the author of four previous books, including two "New York Times "bestsellers: "The Bad Guys Won!" and "Boys Will Be Boys." He is a columnist for SI.com, a contributor to "The Wall Street Journal," and blogs regularly on jeffpearlman.com. Pearlman and his family live in New York.

“Mr. Halberstam would have been the first to insist that we not confuse fiction with nonfiction, and that we not mistake biography -- the telling of a life -- for hagiography -- the burnishing of a legend. Which was football's big trouble last week, it turns out, as lots of folks who should know better took exception to a new biography of Walter Payton.” –ESPN.com, The Sporting Life

“I found the Walter of your book to be more of a hero than the one people refer to.” – Rick Hogan, WGN Sunday Papers


“Over the weekend I read an advance copy of Sweetness and found it to be an incredible, thoughtful, deep and profound read. It’s exceptional work.  I wouldn’t let an out-of-context excerpt and some enraged condemnations get in the way of a fascinating read about a fascinating man.” – Dan Wetzel, Yahoo! Sports


“READ THE BOOK."
"But if you like texture, if you want to get the sense of a real life lived by a real person with real beauty within and real warts, start reading and do so with an open mind. " – Bob Kravitz, The Indianapolis Star


"Pearlman did not set out to expose Payton but to understand him, to identify and define the qualities that made him so appealing. He was a football-playing hero to millions, true, but he was also a human being of considerable complexity. There’s a story in how those two sides intersected, and a skilled biographer gets to that story." -- New York Times

"If Walter Payton, magnificent football player and Chicago treasure, is enough for you, ignore the book and cherish your memories. If Walter Payton, flawed but fascinating human being, intrigues you, read it. You might come away with a greater appreciation" -- New York Times