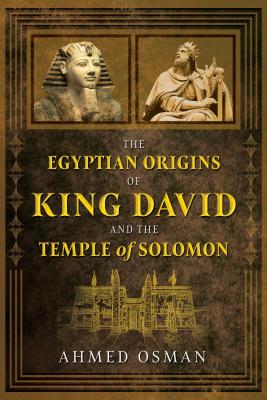 During the last two centuries, thousands of ancient documents from different sites in the Middle East have been uncovered. However, no archaeological discovery speaks of King David or Solomon, his son and successor, directly or in directly. Was King David a real person or a legend like King Arthur? Proposing that David was a genuine historical figure, Ahmed Osman explores how his identity may be radically different than what is described in religious texts.

Drawing on recent archaeological, historical, and biblical evidence from Egypt, Osman shows that David lived in Thebes, Egypt, rather than Jerusalem; that he lived five centuries earlier than previously thought, during the 15th rather than the 10th century B.C.; and that David was not a descendant of Isaac but was, in fact, Isaac’s father. The author also reveals David’s true Egyptian identity: Pharaoh Tuthmosis III of the 18th Dynasty.

Confirming evidence from rabbinic literature that indicates Isaac was not Abraham’s son, despite the version provided in Genesis, Osman demonstrates how biblical narrators replaced David with Abraham the Hebrew to hide the Egyptian identity of Isaac’s father. He shows how Egyptian historical and archaeological sources depict figures that match David’s and Solomon’s known characteristics in many ways, including accounts of a great empire between the Euphrates and the Nile that corresponds with David’s empire as described in the Bible. Extending his research further, the author shows that King Solomon, King David’s son, corresponds in reality to Pharaoh Amenhotep, successor of Tuthmosis III, the pharaoh who stands out in the dynastic history of Egypt not only for his peaceful reign but also as the builder of the Temple of Luxor and the famed Mortuary Temple at Luxor, which matches the biblical descriptions of Solomon’s Temple.

Unveiling the real history behind the biblical story of King David, Osman reveals that the great ancestor of the Israelites was, in fact, Egyptian.

Ahmed Osman was born in Cairo in 1934 and is the author of The Hebrew Pharaohs of Egypt, Moses and Akhenaten, and Jesus in the House of the Pharaohs. He lives in England.

"Ahmed Osman single-handedly moves the goal posts of biblical scholarship . . . . This is a 'must read' for all alternative history buffs and scholars alike."
— Rand Flem-Alth, coauthor of When the Sky Fell and The Atlantis Blueprint

“An excellent, robust, and intriguing piece of historical detective work.”
— Graham Hancock author of Fingerprints of the Gods

“No one since Sigmund Freud has done more to show the connection between ancient Egypt’s Amarna period and the biblical stories of Joseph, Moses, and the Exodus. Ahmed Osman now provides compelling new evidence showing the true roots behind the establishment of the kingdom of Israel and the building of the Temple of Solomon.”
— Andrew Collins, author of The Cygnus Key and Göbekli Tepe:Genesis of the Gods

“Ahmed Osman has discovered an intriguing back door into biblical history. Walking the tightrope between skeptical archaeologists and true believers of the Bible, the author asks a compelling question: Did Hebrew scribes attribute the military victories of an Egyptian pharaoh to David, the famous slayer of Goliath?”
— Rand and Rose Flem-Ath, authors of The Murder of Moses