Zecharia Sitchin and the Extraterrestrial Origins of Humanity (Paperback) 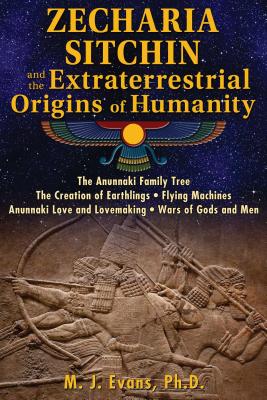 Zecharia Sitchin and the Extraterrestrial Origins of Humanity (Paperback)


Usually Ships in 1-2 Days
An in-depth analysis of Sitchin’s revelations about the Anunnaki, early humanity, and Earth’s future

• Examines Sitchin’s research into the Anunnaki arrival on Earth, the lineage of the Nefilim, their space travel technology, and their creation of modern humans

• Written by longtime Sitchin friend and colleague M. J. Evans, Ph.D., and draws upon her research and personal discussions with Sitchin

Known for his provocative interpretations of ancient Sumerian and Akkadian clay tablets, Zecharia Sitchin (1920-2010) read the words of our most ancient ancestors as fact and, through decades of meticulous research, showed that these ancient tablets revealed a coherent narrative about the extraterrestrial inhabitants of Earth and the origins of modern humanity.

Drawing upon her many conversations with Zecharia Sitchin over nearly 20 years, M. J. Evans, Ph.D., longtime Sitchin friend and colleague, provides an in-depth analysis of Sitchin’s revelations about the Anunnaki, focusing on Anunnaki activities on Earth and Earth’s future. She explores the genesis of Sitchin’s interest in the Nefilim, the leaders of the Anunnaki, and the controversy caused by the publication of Sitchin’s first book, The 12th Planet. She examines Sitchin’s research into the Nefilim family tree, the Anunnaki arrival on Earth to mine gold to repair the atmosphere on their planet, Nibiru, and their creation of modern humans as workers for their mines and to build their civilization on Earth. She shows how, in the context of 21st-century technological capabilities, Sitchin’s work casts a different light on ancient events, with implications for our future. The author reveals the details of the love and lust proclivities of the Nefilim gods Anu, Enlil, and Enki and the goddess Ishtar/Inanna and shows how we inherited these tendencies from our Anunnaki creators as well as their use of war for problem solving.

Concluding with an examination of Sitchin’s prediction of a nuclear event on Earth in 2024 AD, she shows how we would be repeating the aggressive warlike behaviors of our Anunnaki creators, who may very well become our saviors when Nibiru next returns to our solar system.
M. J. EVANS, Ph.D., is professor emeritus at SUNY Empire State College, where she taught environmental geography for 30 years. A friend and colleague of Zecharia Sitchin for nearly 20 years, she accompanied Sitchin on several tours to ancient sites in the Mediterranean region, Europe, and Mexico and has appeared on the TV show Ancient Aliens to discuss Sitchin’s work. She spends most of each year in Turkey, where she studies ancient sites and landscapes
“No other modern thinker has offered a more compelling, coherent, and influential explanation of humanity’s origins than Zecharia Sitchin. Millions of people make sense of the human experience through the lens of his discoveries and findings. Now, thankfully, M. J. Evans has done us all the favor of distilling Sitchin’s work into a very readable compendium. We should all be very grateful.”
— John L. Petersen, futurist, author, and publisher of FUTUREdition