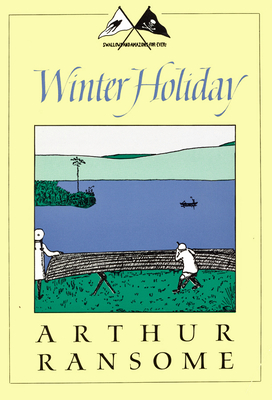 Lost in a blizzard on a frozen lake, a brother and sister, Dick and Dorothea Callum, are in great danger. It's Swallows and Amazons to the rescue (they hope) in this wintertime adventure.

The Ds (Dick and Dorothea) meet the Swallows and Amazons during the winter beside the lake and they all become great friends: joining together in ice skating, learning semaphore signals, refashioning an igloo, and building an ice sled. But a misunderstanding could lead to disaster as Dick and Dorothea head off across the frozen lake to a spot they have named the "North Pole." And, Nancy, the Amazon leader, is stuck at home with mumps. Friendship and resourcefulness, dangers and rescues: Arthur Ransome's Swallows and Amazons series has stood the test of time. More than just great stories, each one celebrates independence and initiative with a colorful, large cast of characters. Winter Holiday (originally published in 1933) is the fourth title in the Swallows and Amazons series, books for children or grownups, anyone captivated by a world of adventure, exploration, and imagination.

ARTHUR RANSOME was born in Leeds in 1884. He had an adventurous life -- as a baby he was carried by his father to the top of the Old Man of Coniston, a peak that is 2,276 ft high! He went to Russia in 1913 to study folklore and in 1914, at the start of World War I he became a foreign correspondent for the "Daily News." In 1917 when the Russian Revolution began he became a journalist and was a special correspondent of the "Guardian." He played chess with Lenin and married Trotsky's personal secretary, Evgenia Petrovna Shelepina. On their return to England, he bought a cottage near Windermere in the Lake District and began writing children's stories. In a 1958 author's note, Ransome wrote: ''I have been often asked how I came to write "Swallows and Amazons." The answer is that it had its beginning long, long ago when, as children, my brother, my sisters and I spent most of our holidays on a farm at the south end of Coniston. We played in or on the lake or on the hills above... Going away from it we were half drowned in tears. While away from it, as children and as grown-ups, we dreamt about it. No matter where I was, wandering about the world, I used at night to look for the North Star and, in my mind's eye, could see the beloved sky-line of great hills beneath it. "Swallows" grew out of those old memories. I could not help writing it. It almost wrote itself.'' He published the first of his children's classics, the 12 "Swallows and Amazons" books, in 1930. In 1936 he won the first ever Carnegie Medal for his book, "Pigeon Post." He died in 1967.