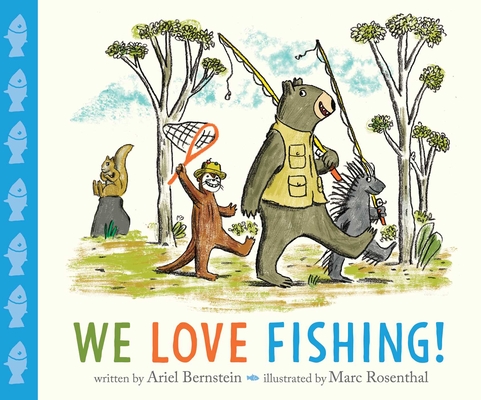 
Usually Ships in 1-2 Days
Perfect for fans of Mo Willems, this hilarious picture book explores feeling like the odd one out with bright and engaging art by New York Times bestselling illustrator Marc Rosenthal.

It’s a beautiful day, and a group of friends are excited to spend it together. The woodland creatures can’t wait to pile into their boat and go fishing! Or, at least, Bear, Porcupine, and Otter can’t wait. They love fishing. Squirrel…does not.

Squirrel tags along with his enthusiastic friends, but is there anything they all love? Or is this fishing trip already sunk?
Ariel Bernstein is the author of I Have a Balloon, which received starred reviews from Publishers Weekly and Kirkus Reviews and was a Junior Library Guild Selection; Where Is My Balloon?, a Bank Street Best Book of the Year; We Love Fishing!, which Publishers Weekly called “relatable and funny” in a starred review; and You Go First. She lives in New Jersey with her family. Learn more at ArielBernsteinBooks.com.

Marc Rosenthal is the New York Times bestselling illustrator of many books for children, including the Small Walt collection by Elizabeth Verdick, All You Need Is Love by John Lennon and Paul McCartney, I Must Have Bobo! by Eileen Rosenthal, We Love Fishing! by Ariel Bernstein, and Archie and the Pirates, which he wrote. He lives in Great Barrington, Massachusetts. Learn more at Marc-Rosenthal.com.
Though pals Bear, Otter, and Porcupine profess the titular love of fishing, Squirrel, contrary to the insistence of Bernstein’s (the Warren & Dragon series) perky narrator, does not: “Fish smell too fishy,” he says, holding his nose, tongue out. But he joins his friends on their bucolic fishing expedition anyway, becoming increasingly cranky—about the walk through the woods to the water (“I stepped on a pebble”), the sheer boredom of sitting in the boat (“I ate all my nuts already. Nuts”), and the sudden rainstorm that Bear finds refreshing (“Rain makes my fur frizz”). . . . Rosenthal (the Small Walt series) slyly sabotages his own sunny drawing style as he portrays the irritation that inevitably arises out of close relationships: Squirrel’s misery is both relatable and funny, and the pals both oblivious and well meaning.
— Publishers Weekly, STARRED REVIEW

The exaggerated expressiveness in the bright illustrations, all the way to the fishy endpapers, makes the play between art and text especially enjoyable for sharing.
— The Horn Book