Court of Injustice: Law Without Recognition in U.S. Immigration (Paperback) 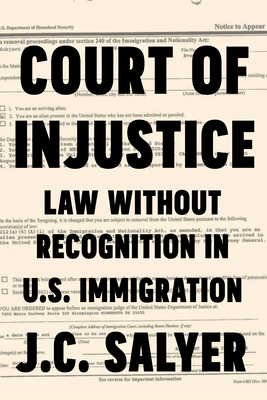 Court of Injustice: Law Without Recognition in U.S. Immigration (Paperback)

Court of Injustice reveals how immigration lawyers work to achieve just results for their clients in a system that has long denigrated the rights of those they serve. J.C. Salyer specifically investigates immigration enforcement in New York City, following individual migrants, their lawyers, and the NGOs that serve them into the immigration courtrooms that decide their cases.

This book is an account of the effects of the implementation of U.S. immigration law and policy. Salyer engages directly with the specific laws and procedures that mandate harsh and inhumane outcomes for migrants and their families. Combining anthropological and legal analysis, Salyer demonstrates the economic, historical, political, and social elements that go into constructing inequity under law for millions of non-citizens who live and work in the United States. Drawing on both ethnographic research conducted in New York City and on the author's knowledge and experience as a practicing immigration lawyer at a non-profit organization, this book provides unique insight into the workings and effects of U.S. immigration law. Court of Injustice provides an up-close view of the experiences of immigration lawyers at non-profit organizations, in law school clinics, and in private practice to reveal limitations and possibilities available to non-citizens under U.S. immigration law. In this way, this book provides a new perspective on the study of migration by focusing specifically on the laws, courts, and people involved in U.S. immigration law.

J.C. Salyer is Assistant Professor of Practice in Anthropology and Human Rights at Barnard College, Columbia University. Salyer is Director of the Human Rights Program at Barnard, and also a staff attorney for the Arab-American Family Support Center, a community-based organization in Brooklyn, where he runs the organization's immigration clinic.