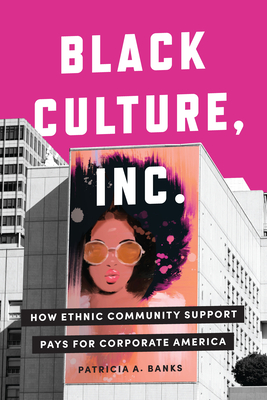 By Patricia a. Banks

A surprising and fascinating look at how Black culture has been leveraged by corporate America.

Open the brochure for the Alvin Ailey American Dance Theater, and you'll see logos for corporations like American Express. Visit the website for the Apollo Theater, and you'll notice acknowledgments to corporations like Coca Cola and Citibank. The Martin Luther King, Jr. Memorial and the National Museum of African American History and Culture, owe their very existence to large corporate donations from companies like General Motors. And while we can easily make sense of the need for such funding to keep cultural spaces afloat, less obvious are the reasons that corporations give to them. In Black Culture, Inc., Patricia A. Banks interrogates the notion that such giving is completely altruistic, and argues for a deeper understanding of the hidden transactions being conducted that render corporate America dependent on Black culture.

Drawing on a range of sources, such as public relations and advertising texts on corporate cultural patronage and observations at sponsored cultural events, Banks argues that Black cultural patronage profits firms by signaling that they value diversity, equity, and inclusion. By functioning in this manner, support of Black cultural initiatives affords these companies something called diversity capital, an increasingly valuable commodity in today's business landscape. While this does not necessarily detract from the social good that cultural patronage does, it reveals its secret cost: ethnic community support may serve to obscure an otherwise poor track record with social justice.

Banks deftly weaves innovative theory with detailed observations and a discerning critical gaze at the various agendas infiltrating memorials, museums, and music festivals meant to celebrate Black culture. At a time when accusations of discriminatory practices are met with immediate legal and social condemnation, the insights offered here are urgent and necessary.

Patricia A. Banks (Harvard University Ph.D. & A.M./Spelman College B.A.) is Professor of Sociology and a faculty member in the Program in Africana Studies and the Program in Entrepreneurship, Organizations, and Society at Mount Holyoke College. She is author of Represent: Art and Identity Among the Black Upper-Middle Class (2010).