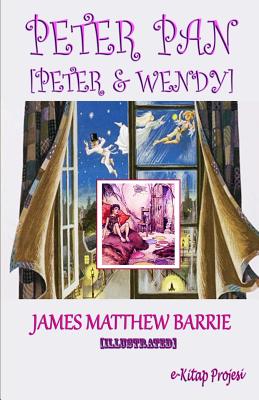 Barrie never described Peter's appearance in detail, even in the novel Peter and Wendy (1911), leaving much of it to the imagination of the reader and the interpretation of anyone adapting the character. Barrie mentions in Peter and Wendy that Peter Pan still had all of his "first teeth". He describes him as a beautiful boy with a beautiful smile, "clad in skeleton leaves and the juices that flow from trees". In the play, Peter's outfit is made of autumn leaves and cobwebs. His name and playing the flute or pipes suggest the mythological character Pan.Traditionally, the character has been played on stage by an adult woman. Peter Breaks Through "All children, except one, grow up. They soon know that they will grow up, and the way Wendy knew was this. One day when she was two years old she was playing in a garden, and she plucked another flower and ran with it to her mother. I suppose she must have looked rather delightful, for Mrs. Darling put her hand to her heart and cried, "Oh, why can't you remain like this for ever " This was all that passed between them on the subject, but henceforth Wendy knew that she must grow up. You always know after you are two. Two is the beginning of the end. Of course they lived at 14 their house number on their street], and until Wendy came her mother was the chief one. She was a lovely lady, with a romantic mind and such a sweet mocking mouth. Her romantic mind was like the tiny boxes, one within the other, that come from the puzzling East, however many you discover there is always one more; and her sweet mocking mouth had one kiss on it that Wendy could never get, though there it was, perfectly conspicuous in the right-hand corner. The way Mr. Darling won her was this: the many gentlemen who had been boys when she was a girl discovered simultaneously that they loved her, and they all ran to her house to propose to her except Mr. Darling, who took a cab and nipped in first, and so he got her. He got all of her, except the innermost box and the kiss. He never knew about the box, and in time he gave up trying for the kiss. Wendy thought Napoleon could have got it, but I can picture him trying, and then going off in a passion, slamming the door. Mr. Darling used to boast to Wendy that her mother not only loved him but respected him. He was one of those deep ones who know about stocks and shares. Of course no one really knows, but he quite seemed to know, and he often said stocks were up and shares were down in a way that would have made any woman respect him. Mrs. Darling was married in white, and at first she kept the books perfectly, almost gleefully, as if it were a game, not so much as a Brussels sprout was missing; but by and by whole cauliflowers dropped out, and instead of them there were pictures of babies without faces. She drew them when she should have been totting up. They were Mrs. Darling's guesses. Wendy came first, then John, then Michael. ..

Sir James Matthew Barrie, (9 May 1860 - 19 June 1937) was a Scottish author and dramatist, best remembered today as the creator of Peter Pan. The child of a family of small-town weavers, he was educated in Scotland. He moved to London, where he developed a career as a novelist and playwright. There he met the Llewelyn Davies boys who inspired him in writing about a baby boy who has magical adventures in Kensington Gardens (included in The Little White Bird), then to write Peter Pan, or The Boy Who Wouldn't Grow Up, a "fairy play" about this ageless boy and an ordinary girl named Wendy who have adventures in the fantasy setting of Neverland. This play quickly overshadowed his previous work and although he continued to write successfully, it became his best-known work, credited with popularising the name Wendy, which was very uncommon previously. Barrie unofficially adopted the Davies boys following the deaths of their parents. Barrie was made a baronet by George V in 1913, and a member of the Order of Merit in 1922. Before his death, he gave the rights to the Peter Pan works to London's Great Ormond Street Hospital, which continues to benefit from them.