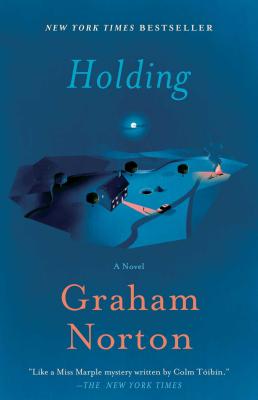 From Graham Norton—the BAFTA Award–winning and hugely popular BBC America television host—comes a charming debut novel set in an idyllic Irish village where a bumbling investigator has to sort through decades of gossip and secrets to solve a mysterious crime. “With its tale of provincial life, gimlet-eyed spinsters, and thwarted love…it feels almost like a Miss Marple mystery written by Colm Tóibín” (The New York Times).

So when human remains—suspected to be those of Tommy Burke, a former lover of both Brid and Evelyn—are discovered on an old farm, the village’s dark past begins to unravel. As a frustrated P.J. struggles to solve a genuine case for the first time in his professional life, he unearths a community’s worth of anger and resentments, secrets and regrets.

Darkly comic, at times profoundly sad, and “especially inviting because of its tongue-in-cheek wit” (Kirkus Reviews), Holding is a masterful debut. Graham Norton employs his acerbic humor to breathe life into a host of lovable characters, and explore—with searing honesty—the complexities and contradictions that make us human.

"A wistful, atmospheric mystery . . . as this winning tale shows, sometimes things work themselves out in ways no one could have imagined."
— Publishers Weekly

"A mystery laced with a sense of humor . . . yet the narrative also deepens into moments of unexpected sadness and insight . . . . A bright, quick-paced novel, especially inviting because of its tongue-in-cheek wit."
— Kirkus Reviews

"Thoroughly enjoyable . . . Fans of the cozy mysteries of Alan Bradley and Alexander McCall Smith will love this debut by THE GRAHAM NORTON SHOW star and clamor for more tales of Duneen."
— Library Journal (starred review)

"The author uses his typically sharp and piercing sense of humor to breathe life into a multitude of delightful characters. . . . a charming debut novel."
— New York Journal of Books

"It is beautiful and yet devastatingly sad."
— Daily Express

"An undercurrent of black comedy accompanies the ripples that ensue - but with a pathos that makes this deftly plotted story as moving as it is compelling."
— Sunday Mirror