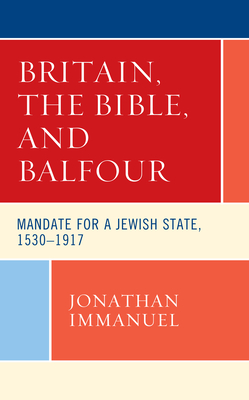 In 1917 only Britain would have taken the decision to favor a Jewish "national home" when the opportunity occurred to dismantle the Ottoman Empire, for it had been interlocked with the Hebrew Bible since political and theological crises in sixteenth- and seventeenth-century England released the so-called Old Testament from its defined role as a christological premonition of the New Testament. Britain, the Bible, and Balfour unpacks the tumultuous history of the idea of a unique Jewish home state--and the development of Zionism--as it took shape over the course of several centuries in England. The author argues that, in fact, the theopolitical vision of Zionism is a peculiarly British phenomenon with roots that go back to the English Reformation. The religious and political battles over the Bible, the role of Hebrew scripture, the monarchy, and national identity provided the fortuitous, if providential, groundwork for the recovery of a vision of the Jewish people as a unique community with a mandated home. Zionism emerged from this context as a powerful movement that advocated for the return of the land and the people as a divinely ordained religious and political project. Yet, as this volume demonstrates, that idea is explicable only on the basis of the contextual events in early modern England, and would take nearly five hundred years to become a geopolitical reality. This volume provides a critically important genealogical account and illuminates the fascinating history of how England became the surprising progenitor of a revolutionary idea.

Jonathan Immanuel is a fellow of the Van Leer Jerusalem Institute in Jerusalem.