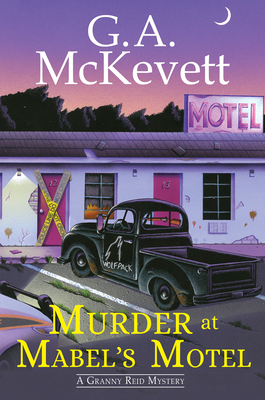 This is book number 3 in the A Granny Reid Mystery series.

G.A. McKevett returns with the third installment in her spin-off series set in the 1980s--thirty years before her popular Savannah Reid series in the small Georgia town that Savannah grew up in, with her beloved--and much younger--Granny Reid as the sleuth! Stella "Granny" Reid's youth wasn't the only thing changed by time in tiny, nondescript McGill, Georgia. Except even in the Reagan era, the Southern town still had a way of attracting downright dubious characters--including an ignorant gang believed to have orchestrated several hate crimes...

As quirky as McGill's residents can be, they usually welcome society's oddballs and outcasts into the community with open arms. But the three members of the Lone White Wolf Pack are a different story. Townsfolk aren't feeling the least bit neighborly toward the ignorant gang widely believed to have orchestrated several hate crimes in the area...

When the small group's irredeemable leader, Billy Ray Sonner, is found dead in an abandoned motel, most assume it was the result of an accidental overdose. An unfortunate yet predictable end for a man who lived the way Billy did. Only Stella and the sheriff have witnessed the crime scene in person, and the smell of cyanide means something more disturbing happened in that ramshackle room. Something like homicide...

While Stella wades through a flood of suspects, uncovered secrets link both Billy's closest allies and respected locals to the incident. One thing is certain--this wasn't an impulsive act of revenge. There's a sophisticated killer on the loose, and Stella must expose deep-rooted fears and dark pasts if she wants to crack a carefully planned murder and stop McGill from descending into chaos.

G.A. McKevett is the author of the acclaimed Savannah Reid mystery series and its spin-off, the Granny Reid Mysteries. Also writing under the name Sonja Massie, she has authored over 60 books ranging from cozy mysteries, to historical romances, to nonfiction works on the history of Ireland. Her earthy humor and fast-paced plots delight her fans, while critics applaud her offbeat characterizations and incisive observations on human nature. Irish by ancestry, she has lived in Toronto, Ireland, and Los Angeles, but now resides in New York. Readers can visit her online at SonjaMassie.com.