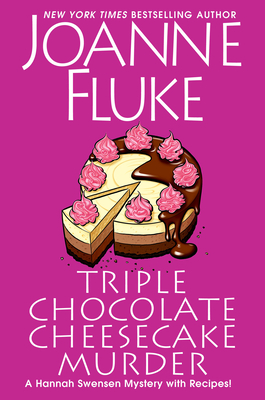 This is book number 24 in the A Hannah Swensen Mystery series.

The beloved New York Times bestselling author and Queen of the Culinary Mystery delivers a new mouthwatering Hannah Swensen Mystery with brand new recipes, but it’s not just chocolate bunnies and Peeps on the menu, this year someone is serving up murder for Easter!

Spring has sprung in Lake Eden, Minnesota, but Hannah Swensen doesn’t have time to stop and smell the roses—not with hot cross buns to make, treats to bake, and a sister to exonerate . . .

Hannah’s up to her ears with Easter orders rushing in at The Cookie Jar, plus a festive meal to prepare for a dinner party at her mother’s penthouse. But everything comes crashing to a halt when Hannah receives a panicked call from her sister Andrea—Mayor Richard Bascomb has been murdered . . . and Andrea is the prime suspect.

Even with his reputation for being a bully, Mayor Bascomb had been unusually testy in the days leading up to his death, leaving Hannah to wonder if he knew he was in danger. There are plenty of suspects to sift through for sure. And as orders pile up at The Cookie Jar—and children line up for Easter egg hunts—Hannah must spring into investigation mode and identify the real killer . . . before another murder happens!

Joanne Fluke is the New York Times bestselling author of the Hannah Swensen mysteries, which include Double Fudge Brownie Murder, Blackberry Pie Murder, Cinnamon Roll Murder, and the book that started it all, Chocolate Chip Cookie Murder. That first installment in the series premiered as Murder, She Baked: A Chocolate Chip Cookie Mystery on the Hallmark Movies’ Mysteries Channel. Like Hannah Swensen, Joanne Fluke was born and raised in a small town in rural Minnesota, but now lives in Southern California. Please visit her online at www.JoanneFluke.com.
Praise for Triple Chocolate Cheesecake Murder

“With its 31 meticulously detailed recipes, including one for the mega-calorific cheesecake of the title, amounts to a cookbook with a slim slice of crime on the side.”
—Publishers Weekly

“Fans of the beloved long-running series will revel in another encounter with the familiar cast of characters, all the while relishing the baking frame and the delicious-sounding recipes that are interspersed throughout.”
—Booklist