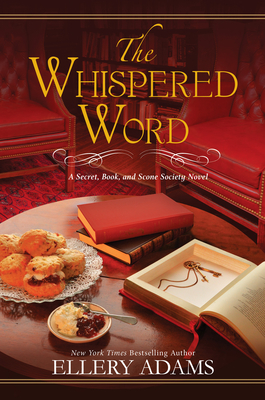 This is book number 2 in the A Secret, Book and Scone Society Novel series.

Nora Pennington, owner of Miracle Books, believes that a well-chosen novel can bring healing and hope. But she and the other members of the Secret, Book, and Scone Society know that sometimes, practical help is needed too. Such is the case with the reed-thin girl hiding in the fiction section of Nora’s store, wearing a hospital ID and a patchwork of faded bruises. She calls herself Abilene, and though Nora and her friends offer work, shelter, and a supportive ear, their guest isn’t ready to divulge her secrets. But when a customer is found dead in an assumed suicide, Nora uncovers a connection that points to Abilene as either a suspect—or another target.

Summer’s end has brought other new arrivals to Miracle Springs too. Entrepreneur Griffin Kingsley opens Virtual Genie, a cyber business that unloads people’s unwanted goods for cash. With the town in an economic slump and folks hurting for money, Virtual Genie and its owner are both instantly popular. A patient listener, Griffin dispenses candy to children and strong coffee to adults, and seems like a bona fide gentleman. But Nora’s not inclined to judge a book by its cover. And when a second death hits town, Nora and her intrepid friends must help the new, greenhorn sheriff discern fact from fiction—and stop a killer intent on bringing another victim’s story to a close . . .
Ellery Adams has written over thirty mystery novels and can’t imagine spending a day away from the keyboard. Ms. Adams, a native New Yorker, has had a lifelong love affair with stories, food, rescue animals, and large bodies of water. When not working on her next novel, she bakes, gardens, spoils her three cats, and spends far too much time on Pinterest. She lives with her husband and two children (aka the Trolls) in Chapel Hill, NC. For more information, please visit www.elleryadamsmysteries.com.
Praise for The Whispered Word:

"A love letter to reading, with sharp characterizations and a smart central mystery."
--Entertainment Weekly

“Adams launches an intriguing new mystery series, headed by four spirited amateur sleuths and touched with a hint of magical realism, which celebrates the power of books and women’s friendships. Adams’s many fans, readers of Sarah Addison Allen, and anyone who loves novels that revolve around books will savor this tasty treat.”
—Library Journal (starred review), Pick of the Month

“Adams kicks off a new series featuring strong women, a touch of romance and mysticism, and both the cunning present-day mystery and the slowly revealed secrets of the intriguing heroines’ pasts.”
—Kirkus Reviews

“This affecting series launch from Adams provides all the best elements of a traditional mystery. . . . Well-drawn characters complement a plot with an intriguing twist or two.”
—Publishers Weekly

“Adams’ new series blends magical realism, smart women, and small-town quirks to create a cozy mystery that doubles as a love letter to books. Readers will fall in love with Nora’s bookstore therapy and Hester’s comfort scones. Not to mention Estella, June, hunky Jed the paramedic, and Nora’s tiny house-slash-converted-train-caboose . . . a book that mystery fans—and avid readers—won’t want to put down until they have savored every last crumb.”
—RT Book Reviews