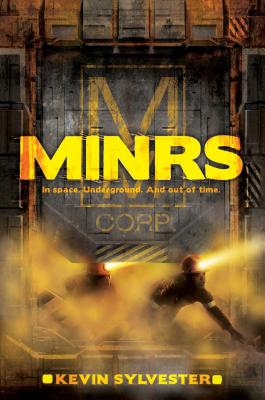 This is book number 1 in the MiNRS series.

A boy and his friends must find a way to survive in the mining tunnels after their new space colony is attacked in this gritty action-adventure novel, which School Library Journal called “a solid survival story.”

In space. Underground. And out of time.

Christopher Nichols and his family live on a new planet, Perses, as colonists of Melming Mining’s Great Mission to save the earth. Dozens of families like Christopher’s have relocated, too, like his best friend Elena Rosales.

A communications blackout with Earth hits, and all of Perses is on its own for three months. It’s okay, though, because the colonists have prepared, stockpiling food and resources to survive. But they never prepared for an attack.

Landers, as the attackers are called, obliterate the colony to steal the metal and raw ore. Now in a race against time, Christopher, along with a small group of survivors, are forced into the maze of mining tunnels. The kids run. They hide. But can they survive?

Kevin Sylvester is an award-winning writer, illustrator, and broadcaster. His books include the MiNRS trilogy and the Neil Flambé series. He lives in Toronto, Ontario. Visit him at KevinSylvesterBooks.com or on Twitter @KevinArts.

"Brainy and somewhat naïve, Christopher makes for a solid, earnest narrator, and the other kids, especially his enthusiastic friend Elena, are similarly believable."
— Publishers Weekly

"Plot twists and turns pull readers through the novel and keep them on the edge of their seats. There is never a dull moment or unnecessary scene. VERDICT A solid survival story with a cliff-hanger ending that will leave readers clamoring for more."
— School Library Journal

“A space adventure like no other, this book takes the reader to a new world. Sci-fi readers will love the non-stop action, futuristic setting, space travel, technology, and the possibility of life on another planet.”
— School Library Connection