The Song and the Silence: A Story about Family, Race, and What Was Revealed in a Small Town in the Mississippi Delta While Searching for Booker Wright (Hardcover) 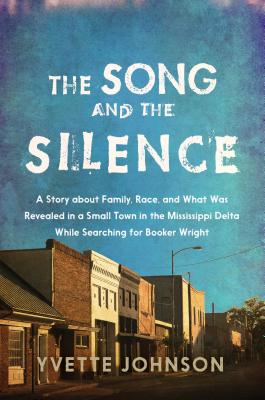 In this moving memoir, Yvette Johnson travels to the Mississippi Delta to uncover true the story of her late grandfather Booker Wright whose extraordinary act of courage would change both their lives forever.

“Have to keep that smile,” Booker Wright said in the 1966 NBC documentary Mississippi: A Self-Portrait. At the time, Wright spent his evenings waiting tables for Whites at a local restaurant and his mornings running his own business. The ripple effect from his remarks would cement Booker as a civil rights icon because he did the unthinkable: before a national audience, Wright described what life truly was like for the Black people of Greenwood, Mississippi.

Four decades later, Yvette Johnson, Wright’s granddaughter, found footage of the controversial documentary. No one in her family knew of his television appearance. Even more curious for Johnson was that for most of her life she’d barely heard mention of her grandfather’s name.

Born a year after Wright’s death and raised in a wealthy San Diego neighborhood, Johnson admits she never had to confront race the way Southern Blacks did in the 1960s. Compelled to learn more about her roots, she travels to Greenwood, Mississippi, a beautiful Delta town steeped in secrets and a scarred past, to interview family members and townsfolk about the real Booker Wright. As she uncovers her grandfather’s compelling story and gets closer to the truth behind his murder, she also confronts her own conflicted feelings surrounding race, family, and forgiveness.

Told with powerful insights and harrowing details of civil rights–era Mississippi, The Song and the Silence is an astonishing chronicle of one woman’s passionate pursuit of her own family’s past. In the stories of those who came before, she finds not only a new understanding of herself, but a hopeful vision of the future for all of us.

Yvette Johnson is a writer, film producer, and speaker. She coproduced the documentary Booker’s Place: A Mississippi Story, which premiered at the 2012 Tribeca Film Festival.

“In addition to beautiful, evocative descriptions, a great strength of Johnson’s writing lies in her unique ability to absorb and relay several dimensions of conversations about painful and emotional topics.”
— Booklist (Starred Review)

“A timely story of fragmentation and division and of picking one's way through the minefield that was—and is—the racially riven South . . . . Johnson's story is highly personal, but it folds easily into the larger story of African-Americans striving for economic and political betterment.”
— Kirkus Reviews

“Richly descriptive, unsparing in its account of life under Jim Crow, and a touching account of love that extends over generations.”
— Associated Press

“This rich and complex family history will appeal to anyone desiring a greater understanding of the consequences of intolerance in America.”
— Library Journal

"This is the best [book] I have read capturing the essence of the two most important issues of our time—the move of the black race from rural to urban, and the struggle encountered in the move from poor to middle-class.”

— James Meredith, first African American to attend the University of Mississippi and author of A Mission from God

“Insightful and beautifully written, The Song and the Silence is one of those special books that is imprinted on my heart and will be on my mind forever.”
— Amy Hill Hearth, author with the Delany Sisters of the New York Times bestseller, Having Our Say

“The Song and the Silence is riveting and insightful account of Yvette Johnson’s six-year quest to find out who her grandfather was and how he lived his life. In doing so she shares painful details about race relations during the Civil Rights Era, and sheds light on a period of U.S. history characterized by unspeakable injustice and inequality. A skilled story-teller, Johnson brings history to life with vivid details and powerful narrative techniques.”
— Duane Roen, professor of English, Arizona State University

“A heartfelt, beautifully written odyssey for a heritage that was worth seeking. An often emotionally harrowing journey taken by the author . . . . Through many interviews with those who had known her grandfather what she encountered was complex, deeply moving and often painful. Over time she came to appreciate her own legacy, which was a gift not only for Ms. Johnson but for all the readers who go on this journey with her.”
— Aviva Slesin, documentarian and Open Arts program professor, Tisch School of the Arts, New York University

“Johnson brings a compassionate and uncompromising gaze to the tragic history of her African American family. An unforgettable take on how we are shaped by an unknown past and how an open-eyed and honest voyage through that pain can make us whole.”
— Karen Branan, author of The Family Tree