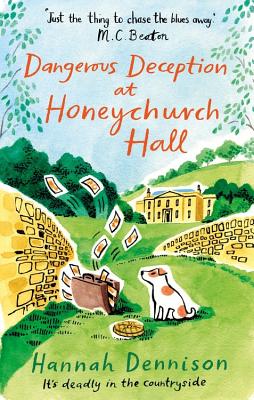 Things are going well for Kat Stanford; not only is her antiques business thriving, she's also got a new date: Piers Carew, Viscount Chawley, who owns the estate next to Honeychurch Hall.

Unfortunately, Kate has a rival. Impossibly beautiful Cassandra Bowden-Forbes is also in town, conducting valuations at the same fairs as Kat - and she makes no secret of the fact she's got her eye on Piers . . .

And then things start to go wrong: Kat finds herself at the scene of not one but two mysterious deaths, and local tongues are wagging - is it coincidence, or murder? As Kat's fortunes nosedive it becomes clear that unless she can solve these unexplained deaths then she may just be the victim of the next accident . . .

'Just the thing to chase the blues away' M. C. Beaton

'The perfect classic English village mystery but with the addition of charm, wit and a thoroughly modern touch' Rhys Bowen

'Sparkles like a glass of Devon cider on a summer afternoon' Elizabeth Duncan
Hannah Dennison was born and raised in Hampshire but on leaving school landed a job as an obituary writer/amateur dramatic reviewer for a Devon newspaper.

The urge to travel was too strong, however, and she became an air stewardess, first with British Caledonian and then on private planes. Many adventures later she ended up in Los Angeles, where she met her future husband - and still lives there with him and their cat.