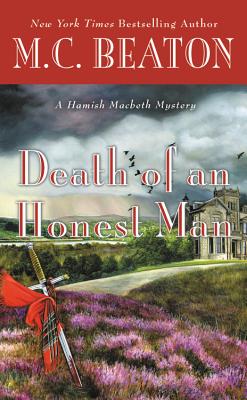 This is book number 33 in the A Hamish Macbeth Mystery series.

Nobody loves an honest man--or that was what police sergeant Hamish Macbeth tried to tell newcomer Paul English. Paul had moved to a house in Cnothan, a sour village on Hamish's beat, where he immediately started to stir up outrage among his neighbors.

Paul first attended church in Lochdubh and told the minister, Mr. Wellington, that his sermons were boring. He then told tweedy Mrs. Wellington that she was too fat and should set a better example in these days of increasing obesity. Angela Brody was told her detective stories were pap for the masses and that she should write real literature instead. He accused Hamish of having dyed his fiery red hair. He told Jessie Currie--who compulsively repeats all the last words of her twin sister--that she needed psychiatric help.

"I speak as I find," he bragged. A refrain of "I could kill that man," could be heard from Lochdubh to Cnothan.

Now Hamish is faced with a bewildering array of suspects, this time without the services of his clumsy policeman, Charlie, who resigned from the force after one too many confrontations with Hamish's incompetent boss, Chief Inspector Blair. But can Hamish find the killer on his own?
M. C. Beaton has won international acclaim for her New York Times bestselling Hamish Macbeth mysteries. The BBC has aired 24 episodes based on the series. Beaton is also the author of the bestselling Agatha Raisin series, which will air as an eight-episode dramatic series on Sky1, starring Ashley Jensen. She lives in the Cotswolds with her husband. For more information, you can visit MCBeaton.com.
"Satisfying for both established and new Macbeth fans."
—Booklist

"Longing for escape? Tired of waiting for Brigadoon to materialize? Time for a trip to Lochdubh, the scenic, if somnolent, village in the Scottish Highlands where M. C. Beaton sets her beguiling whodunits featuring Constable Hamish Macbeth."—New York Times Book Review