Judgment of Paris: California vs. France and the Historic 1976 Paris Tasting That Revolutionized Wine (Compact Disc) 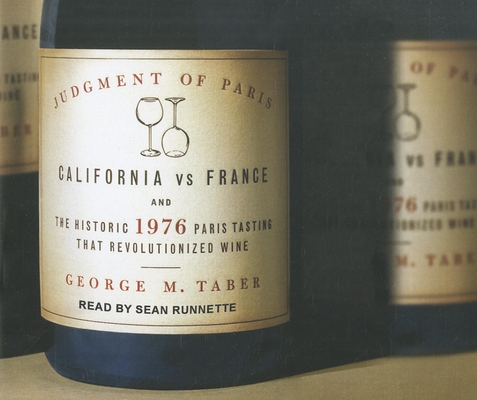 The Smithsonian's National Museum of American History houses, amid its illustrious artifacts, two bottles of wine: a 1973 Stag's Leap Wine Cellars Cabernet Sauvignon and a 1973 Chateau Montelena Chardonnay. These are the wines that won at the now-famous Paris Tasting in 1976, where a panel of top French wine experts compared some of France's most famous wines with a new generation of California wines. Little did they know the wine industry would be completely transformed as a result, sparking a golden age for viticulture that extends beyond France's hallowed borders to Australia, Chile, South Africa, New Zealand, and across the globe. Then Paris correspondent for Time magazine, George M. Taber recounts this seminal contest and its far-reaching effects, focusing on the three gifted unknowns behind the winning wines: a college lecturer, a real estate lawyer, and a Yugoslavian immigrant. At a time when California was best known for cheap jug wine, these pioneers used radical new techniques alongside time-honored winemaking traditions to craft premium American wines that could stand up to France's finest. With unique access to the main players and a contagious passion for his subject, Taber renders this historic event and its tremendous aftershocks in captivating prose, bringing to life an eclectic cast and magnificent settings. For lovers of wine and anyone who enjoys a story of the entrepreneurial spirit of the new world conquering the old, this is an illuminating and deeply satisfying tale.

George M. Taber worked for "Time" magazine as a reporter and editor for twenty-one years, and is the author of "To Cork or Not to Cork," which won the Jane Grigson Award from the International Association of Culinary Professionals.

Sean Runnette, a multiple "AudioFile" Earphones Award winner, has produced several Audie Award-winning audiobooks. He is a member of the American Repertory Theater company, and his television and film appearances include "Two If by Sea," "Copland," "Sex and the City," "Law & Order," and "Third Watch."

"An intoxicating indulgence for Sideways fans, and an education for would-be wine sophisticates." ---Kirkus Starred Review