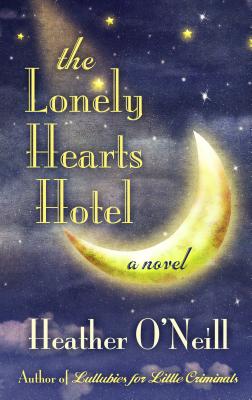 “If there is Canadian magical realism, this is it! The Lonely Hearts Hotel is the charming story of Rose and Pierrot, two children raised in a Montreal orphanage in the early 20th century. O'Neill traces their romance from their childhood of entertaining rich people in their homes to their less salubrious post-orphanage careers. When Rose and Pierrot meet again as adults, magic happens-but can this magic survive the rigors of the real world? Fantastic and fabulous in the truest sense of both words.”
— Susan Taylor (E), Book House of Stuyvesant Plaza, Albany, NY

“The Lonely Hearts Hotel is an enticing novel about a love between two orphans, Pierrot and Rose. As they are put through difficult situations, they go down a rabbit hole of drugs, sex, and criminal behavior. Their love goes in cycles over time, sometimes very strong and at other times waning. The Lonely Hearts Hotel is endearing, disturbing, and enchanting all at the same time. Highly recommended for those wanting to devour a strangely wonderful love story.”
— Kristin Beverly, Half Price Books, Dallas, TX

"So filled with vivid descriptions and complex characters that the reader's experience is virtually cinematic. . . Utterly compelling." - The Washington Post
A spellbinding story about two gifted orphans - in love with each other since they can remember - whose childhood talents allow them to rewrite their future.

The Lonely Hearts Hotel is a love story with the power of legend. An unparalleled tale of charismatic pianos, invisible dance partners, radicalized chorus girls, drug-addicted musicians, brooding clowns, and an underworld whose economy hinges on the price of a kiss. In a landscape like this, it takes great creative gifts to thwart one's origins. It might also take true love.
Two babies are abandoned in a Montreal orphanage in the winter of 1914. Before long, their talents emerge: Pierrot is a piano prodigy; Rose lights up even the dreariest room with her dancing and comedy. As they travel around the city performing clown routines, the children fall in love with each other and dream up a plan for the most extraordinary and seductive circus show the world has ever seen.
Separated as teenagers, sent off to work as servants during the Great Depression, both descend into the city's underworld, dabbling in sex, drugs and theft in order to survive. But when Rose and Pierrot finally reunite beneath the snowflakes - after years of searching and desperate poverty - the possibilities of their childhood dreams are renewed, and they'll go to extreme lengths to make them come true. Soon, Rose, Pierrot and their troupe of clowns and chorus girls have hit New York, commanding the stage as well as the alleys, and neither the theater nor the underworld will ever look the same.
With her musical language and extravagantly realized world, Heather O'Neill enchants us with a novel so magical there is no escaping its spell.

Heather O'Neill is a novelist, poet, short-story writer, screenwriter, and essayist. Lullabies for Little Criminals, her debut novel, was published in 2006 to international critical acclaim and shortlisted for the Orange Prize for Fiction. Born and raised in Montreal, O'Neill lives there today with her daughter.