The House of Hades (Heroes of Olympus #4) (Large Print / Hardcover) 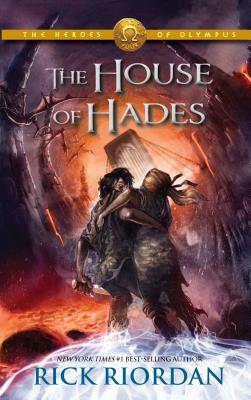 This is book number 4 in the Heroes of Olympus series.

Just in time for holiday gift-giving, this signed and numbered limited edition of "The House of Hades" is the perfect keepsake for fans of the #1 "New York Times "bestselling series. Each book is hand-signed by Rick Riordan and includes specially commissioned art from series illustrator John Rocco. The deluxe slipcase features a wrap-around illustration and makes an elegant centerpiece for any bookshelf.

Rick Riordan (www.rickriordan.com) is the author of The Heroes of Olympus, Book One: The Lost Hero; the New York Times #1 best-selling The Kane Chronicles, Book One: The Red Pyramid; as well as all the books in the New York Times #1 best-selling Percy Jackson and the Olympians series: The Lightning Thief; The Sea of Monsters; The Titan's Curse; The Battle of the Labyrinth; and The Last Olympian. His previous novels for adults include the hugely popular Tres Navarre series, winner of the top three awards in the mystery genre. He lives in San Antonio, Texas, with his wife and two sons.

John Rocco (www.roccoart.com) studied illustration at Rhode Island School of Design and The School of Visual Arts. In addition to writing and illustrating four of his own picture books, including the Caldecott Honor-winning and New York Times bestselling Blackout, he has created all of the cover art for Rick Riordan's best-selling Percy Jackson, Kane Chronicles, and Heroes of Olympus series. He has also illustrated books by Whoopi Goldberg and Katherine Patterson. Before becoming a full-time children's book creator, he worked as an art director on "Shrek" for Dreamworks, and for Disney Imagineering. He lives in Los Angeles with his wife and daughter.