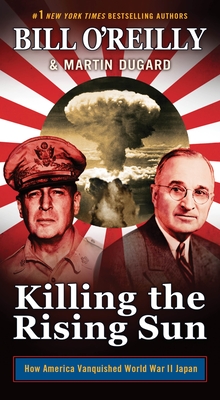 By Bill O'Reilly, Martin Dugard
$9.99
Not Yet Published

In the epic saga Killing the Rising Sun, the multimillion-selling author and trailblazing TV journalist recounts the final moments of World War II like never before.

Autumn 1944. The second World War is nearly over in Europe but is escalating in the Pacific, where General Douglas MacArthur and legions of American soldiers face an opponent who will go to any length to avoid defeat.

Meanwhile, back on U.S. soil, Harry Truman ascends to the presidency after FDR’s death and Dr. J. Robert Oppenheimer prepares to test the most dangerous weapon known to mankind. And in Tokyo, Emperor Hirohito, considered a deity by his subjects despite a massive and mounting death toll, refuses to surrender…

“All the suspense and drama of a popular thriller.” —The Christian Science Monitor