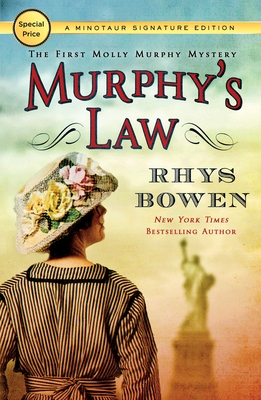 This is book number 1 in the Molly Murphy Mysteries series.

The novel that started it all, Murphy’s Law, will delight readers old and new of this remarkable, bestselling series.

Molly Murphy always knew she’d end up in trouble, just as her mother predicted. So, when she commits murder in self-defense, she flees her cherished Ireland, under cover of a false identity, for the anonymous shores of America. When she arrives in New York and sees the welcoming promise of freedom in the Statue of Liberty, Molly begins to breathe easier. But when a man is murdered on Ellis Island, a man Molly was seen arguing with, she becomes a prime suspect in the crime.

If she can’t clear her name, Molly will be sent back to Ireland, where the gallows await, so using her Irish charm and sharp wit, she escapes Ellis Island and sets out to find the wily killer on her own. Pounding the notorious streets of Hell’s Kitchen and the Lower East Side, Molly undertakes a desperate mission to clear her name before her deadly past comes back to haunt her new future.

*BONUS CONTENT: This edition of Murphy's Law includes a new introduction from the author and a discussion guide

Praise for Rhys Bowen and the Molly Murphy Mysteries

“One of the great mystery writers working today.” --Louise Penny

"Molly is sassy, saucy, brave and smart.” --The Huffington Post

“Readers will surely testify that Murphy has become one of their favorite characters… This book is a keeper.” --Tampa Tribune