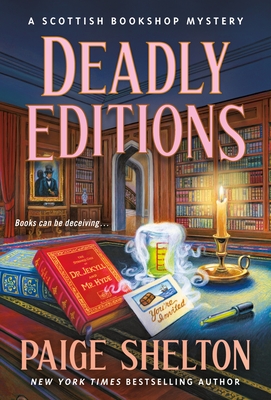 This is book number 6 in the A Scottish Bookshop Mystery series.

A treasure hunt through Edinburgh gives way to a search for a villain terrorizing the city in Deadly Editions, the sixth Scottish Bookshop Mystery from Paige Shelton.

It’s a quiet, snowy morning at The Cracked Spine bookshop, when bookseller Delaney Nichols receives a mysterious visitor, a messenger. He presents her with a perplexing note: an invitation to a meeting with eccentric socialite Shelagh O'Conner, who requests Delaney’s participation in an exclusive treasure hunt. Delaney is intrigued, but also cautious: Shelagh, while charming in person, has a reputation for her hijinks as a wealthy young woman in the '70s. She was even once suspected for the murder of a former boyfriend, though ultimately cleared of all charges.

But Delaney is enticed by the grand prize at the end of the treasure hunt: a highly valuable first edition copy of The Strange Case of Dr. Jekyll and Mr. Hyde, by Robert Louis Stevenson. The winner is also to receive the contents of Shelagh's vast library, and all participants will earn a large sum of cash.

The night after the first meeting of the treasure hunters, however, several homes in Edinburgh are robbed in a manner reminiscent of Shelagh's old tricks. And when a man connected to Shelagh is killed, suspicion builds. Except Shelagh herself has disappeared from her home, seemingly kidnapped by the villain.

Terror mounts throughout the city as Delaney attempts to solve the mystery, while trying to evade the killer's clutches. But it’s hard to know who to trust when around every corner, a new monster could be lurking.

PAIGE SHELTON had a nomadic childhood, as her father's job as a football coach took her family to seven different towns before she was even twelve years old. After college at Drake University in Des Moines, Iowa, she moved to Salt Lake City. She thought she'd only stay a couple years, but instead she fell in love with the mountains and a great guy who became her husband. After many decades in Utah, she and her family moved to Arizona. She writes the Scottish Bookshop Mystery series and the Alaska Wild series. Her other series include the Farmers’ Market, Cooking School, and Dangerous Type mystery series.

"Filled with literary references that will tickle bibliophiles." —Kirkus Reviews

"Vivid descriptions of Edinburgh enhance the well-crafted plot. Cozy fans will look forward to the further adventures of smart and intuitive Delaney." —Publishers Weekly on The Stolen Letter

"The history Delaney uncovers...is fascinating and nicely woven into the tale." —Booklist on The Stolen Letter

"Shelton stocks her tale with appealing characters and intriguing Nessie lore. Cozy fans will be rewarded."
—Publishers Weekly on The Loch Ness Papers

"Shelton’s lovely depictions of Edinburgh, its denizens, and its bookshops will enchant lovers of cozies with a Scottish setting." —Publishers Weekly on Lost Books and Old Bones

"The Edinburgh and greater Scotland settings are lovingly woven throughout the story, which includes details of literature and Scottish history...Delaney is a bright, sympathetic figure surrounded by well-drawn secondary characters." —Booklist on Of Books and Bagpipes