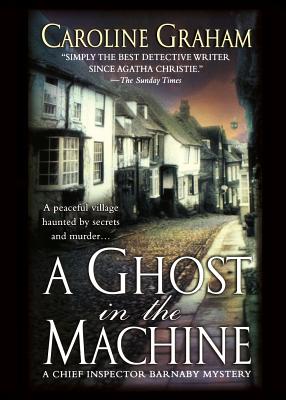 This is book number 7 in the Chief Inspector Barnaby Novels series.

When a bloody, pulverized body is found lying beneath the rustic timbers of an authentic torture device so vicious and complicated as to be blood-curdling, there's sufficient unrest in tiny Forbes Abbot to call in Chief Inspector Barnaby. Was Dennis Brinkley done in by crooked business partners, a teenage seductress, a couple of would-be publishers who've just inherited--and then lost--millions, or perhaps by tired, timid little Benny Fraye, who wouldn't hurt a fly--would she?
Barnaby will soon find out just who set in motion the gruesome machine that crushed the unfortunate victim. Caroline Graham's delightful cozy village mysteries, which inspired the continuing Midsommer Murders series starring Inspector Barnaby on A&E Television, have long been fan-favorites; A Ghost in the Machine is sure to cement her reputation as one of the best crime writers in the mystery business today.

Caroline Graham was born in Warwickshire, England. Her first Inspector Barnaby novel, The Killings at Badger's Drift, was selected as one of the Top 100 Crime Novels of All Time by the Crime Writers' Association.

“Graham's ingeniously constructed novels featuring Chief Inspector Barnaby are actually clever satires, closer to Robert Barnard than Agatha Christie in their cruel theatricality. Although Graham lets a few genuinely nice characters slip away unscathed, her lethal humor can be a bit of a shock for the unknowing reader who finds her among the cozies.” —Marilyn Stasio, The New York Times Book Review

“If Agatha Christie, Stephen King, and Maeve Binchy decided to collaborate, this might be the book they would write a sort of police procedural, murder mystery, horror story, and English-village melodrama all in a single cover. It's an engaging, beguiling, surprising story with wonderfully drawn characters, laugh-aloud humor, sinister twists, and a splendidly multifaceted plot.” —Booklist (starred review)