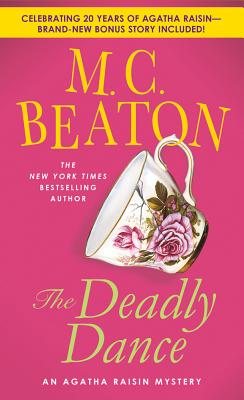 Celebrating 20 Years of Agatha Raisin Brand-New M.C. Beaton Bonus Story Included
Bossy, impulsive, and unlucky in love, the all-too-human Agatha Raisin has proved to be a surprisingly effective---and endearing---amateur sleuth. But can Agatha make it as a private investigator? After getting mugged on vacation, in what she will always think of as the Paris Incident, she decides to find out.

Agatha soon learns that running her own detective agency in the Cotswolds is not quite like starring in a Raymond Chandler movie. Instead of dames in distress with big shoulder pads, her clients are ladies with missing cats and a man whose son has run off with his car. Agatha even worries that she might be outclassed by her sixty-seven-year-old secretary, Emma Comfrey.
But then wealthy divorcee Catherine Laggat-Brown walks in with their first "real" case. Mrs. Laggat-Brown's daughter has received a death threat, and when Agatha thwarts an attack on the girl at a dinner dance, she recognizes an opportunity to show what Raisin Investigations can do. Even better, the case gives her a chance to reunite with her long-absent friend, Sir Charles Fraith. As they scour the Cotswolds in search of leads, Charles' insights prove invaluable and his charms irresistible, leading poor Emma to fall madly in love with him.

As ever, in "The Deadly Dance, " Agatha bumbles her way through the case, trying her friends' patience and flirting shamelessly with the chief suspect. Will she put her tiny agency on the map, or has even the outrageous Agatha finally bitten off more than she can chew?

M. C. Beaton is the author of fourteen previous Agatha Raisin novels, the Hamish Macbeth series, and an Edwardian mystery series written as Marion Chesney. She currently divides her time between Paris and the English Cotswolds.

"It’s been 40 years since Dame Agatha Christie’s death, and in that time, reviewers have often bestowed her mantle on new authors. M. C. Beaton is one of those so honored, and she deserves it. When it comes to artfully constructed puzzle plots and charming settings, Beaton serves it up…This is a classic British cozy plot, and a setting done with panache. Maybe M. C. Beaton really is the new 'Queen of Crime.'"
--The Globe & Mail "Agatha is a one-of-a-kind character. She's anything but charming, yet she charms. As always, Beaton's prose is first rate. Her writing is sharp, penetrating and highly entertaining."--RT Book Reviews "A thoroughly enjoyable, humorous and entertaining offering from M. C. Beaton, which will certainly not disappoint .... This is a lighthearted, page-turning read which will retain your attention on a cold winter's night."--Stornoway Gazette
"It is always fun to read an Agatha Raisin mystery, but the latest installment freshens up a delightful series by converting the heroine from amateur sleuth to professional without changing her caustic wit. Agatha remains crude and rude even to clients, but also retains that vulnerability that endears her to readers."
--Midwest Book Review
"A very satisfying change for the smart woman of mystery with a new cast of colorfully realized characters blending with a few old favorites."
--Mystery Lovers Bookshop News "The story was first-rate and moved along with many twists and turns that kept me always guessing…I read this book in one sitting, which I think speaks for itself."
--I Love a Mystery
"Fans of Agatha Raisin will be absolutely delighted at this latest addition to the series. Ms. Beaton has surpassed herself in The Deadly Dance."--Reviewing the Evidence