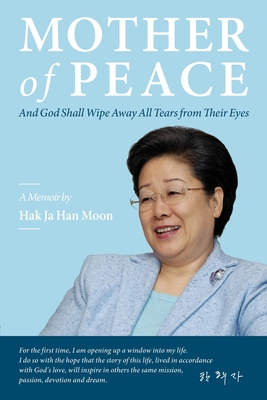 Discover the untold story of Hak Ja Han Moon, the North Korean village girl who is now known to millions as the Mother of Peace. Her heart-wrenching story reveals details of a war-torn childhood and trials of faith as she and her late husband, Rev. Sun Myung Moon, built a vast and still-growing international movement capable of fulfilling God's will for peace in the 21st century.

A major milestone of her life, described in never-told-before detail, was her marriage in 1960, at age 17, to the charismatic Rev. Dr. Sun Myung Moon. For the next 52 years, she joined him in the daunting task of building a global interfaith movement to fulfill God's will for peace in the 21st century.

Mother Moon's journey as a religious woman leader is breathtaking: Born in Japanese-occupied Korea in 1943, she spent her early life in nature so she could commune with God. War forced her to flee south with her mother and grandmother; they crossed the Han River Bridge minutes before it was blown up. Later, she walked and worked side-by-side with Father Moon, one of history's most energetic and visionary men. They visited every corner of the earth and, despite relentless persecution, met with world leaders, including Mikhail Gorbachev and Kim Il Sung, to bring God's message for them.

During this time, she bore 14 children and buried four. She stood with Father Moon for hours as they officiated at Marriage Blessing Ceremonies for hundreds of thousands of couples. Together, they launched hundreds of organizations and businesses to serve youth, family and peacemaking.

Since Father Moon's passing in 2012, Mother Moon has shouldered the leadership of their still-growing movement. She has led "Peace Starts With Me" rallies in six continents and plans to bring Blessing Ceremonies to all people.

"As I complete this book, one person I dearly miss at this moment is my beloved husband, Father Sun Myung Moon. We spent our lives together to convey and accomplish God's will ... If he were here to witness the publication of this book, his face would shine with a joy greater than that of anyone else. The sparkle in his eyes is dancing in my heart today. I hope that this book will reveal a taste of our life spent together for God's will." - Hak Ja Han Moon