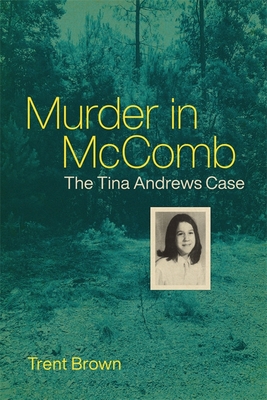 What remained of the badly decomposed body of twelve--year--old Tina Marie Andrews was discovered underneath a discarded sofa in the woods outside of McComb, Mississippi, on August 23, 1969. Ten days earlier, Andrews and a friend had accepted a ride home after leaving the Tiger's Den, a local teenage hangout, but they were driven instead to the remote area where Andrews was eventually murdered. Although eyewitness testimony pointed to two local police officers, no one was ever convicted of this brutal crime, and to this day the case remains officially unsolved. Contemporary local newspaper coverage notwithstanding, the story of Andrews's murder has not been told. Indeed, many people in the McComb community still, more than fifty years later, hesitate to speak of the tragedy.

Trent Brown's Murder in McComb is the first comprehensive examination of this case, the lengthy investigation into it, and the two extended trials that followed. Brown also explores the public shaming of the state's main witness, a fifteen-year-old unwed mother, and the subsequent desecration of Andrews's grave. Set against the uneasy backdrop of the civil rights movement, Brown's study deftly reconstructs various accounts of the murder, explains why the juries reached the verdicts they did, and explores the broader forces that shaped the community in which Andrews lived and died. Unlike so many other accounts of violence in the Jim Crow South, racial animus was not the driving force behind Andrews's murder; in fact, most of the individuals central to the case, from the sheriff to the judges to the victim, were white. Yet Andrews, as well as her friend Billie Jo Lambert, the state's key witness, were "girls of ill repute," as one defense attorney put it. To many people in McComb, Tina and Billie Jo were "trashy" children whose circumstances reflected their families' low socioeconomic standing. In the end, Brown suggests that Tina Andrews had the great misfortune to be murdered in a town where the locals were overly eager to support law, order, and stability--instead of true justice--amid the tense and uncertain times during and after the civil rights movement.

Trent Brown, a native of McComb, Mississippi, is professor of American studies at the Missouri University of Science and Technology. He is author (as Trent Watts) of One Homogeneous People: Narratives of White Southern Identity, 1890-1920 and editor of Sex and Sexuality in Modern Southern Culture.