After Acts: Exploring the Lives and Legends of the Apostles (Paperback) 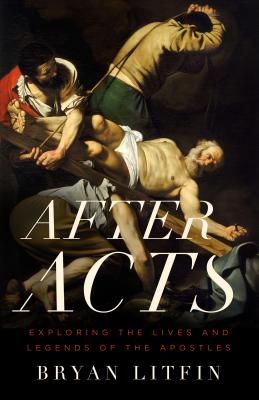 What really happened after Acts?

If you’ve ever wondered what happened to the biblical characters after Acts—from the well-known Matthew to the lesser-known Bartholomew—then this book is for you. Join Dr. Bryan Litfin as he guides you through Scripture and other ancient literature to sift fact from fiction, real-life from legend.

Skillfully researched and clearly written, After Acts is as accurate as it is engaging. Gain a window into the religious milieu of the ancient and medieval church. Unearth artifacts and burial sites. Learn what really happened to your favorite characters and what you should truly remember them for.

The book of Acts ends at chapter 28. But its characters lived on.

BRYAN LITFIN grew up in Dallas, TX; Oxford, England; and Memphis, TN. He earned a degree in print journalism from the University of Tennessee, a master's degree in historical theology at Dallas Seminary, and a Ph.D. in the field of ancient church history at the University of Virginia. He now serves as Education Projects Editor at Moody Publishers in Chicago, IL. Bryan lives with his wife and two teenaged children in Wheaton, IL, and is a member of College Church in Wheaton. Connect with Bryan at www.bryanlitfin.com.

As always, in non-fiction, including religious non-fiction, I look for an author who has done his research and cited his sources.  In this case, I have absolutely no complaints.  Every assumption made in the book is thoroughly sourced and readers are pointed towards these sources explicitly, including a short description of how to locate more difficult to find ancient sources.  I love a good footnote, too, and this one does not disappoint.  The information itself is fascinating, and the writing is superb.

Obviously, this is a case where an interest in the subject matter is going to be necessary in order to enjoy the book.  Personally, I found the book to be engrossing.  Because of my years (and years and years) of Christian education, sometimes I get a bit smug with my knowledge of the Bible.  I was pleased to find that there was so much more to be learned from other ancient sources about what happened in the lives of the Apostles after the Bible ends.  I also thoroughly enjoyed the background and historical information on the writers of the gospels and how they actually experienced Christ and came to write His story.

This is a crucial read for anyone with a knowledge of the Bible, but without a firm grasp on church history.  It provides information on a level accessible to the general reader, but backed with sources and citations for further study that would benefit a more academically inclined reader as well.  I learned so much, which is the highest praise I can give any book, and is especially meaningful when it involves my faith.

Thank you to NetGalley for providing me with a copy to review!"

"After Acts: Exploring the Lives and Legends of the Apostles by Bryan Liftin is a very enjoyable work.  Though scholarly it is written in a tremendously accessible way so that the student as well as the casual reader can both get something from this.

The author chooses those attributed as Gospel and Epistle authors as well as other biblical characters and tries to mind fact and legend, though sometimes not solving and still leaving questions, but offering a satisfying exploration.

One item I liked was the report card at the conclusion of each chapter where a grade from A-F was posted to help determine what is likely a hard fact, and what is mere legend."

All of those questions and more are addressed in After Acts, Exploring the Lives and Legends of the Apostles by Dr. Bryan M. Litfin.

Over the years, I have heard many versions of the lives of these giants of the early church, but many stories were contradictory and some just didn’t make sense.   It’s all very confusing to a layperson, but Dr. Litfin does a masterful job by researching and interpreting all the various writings through the centuries to come to some pretty solid conclusions.
I especially appreciated the “Report Card” at the end of each chapter, listing each tradition or story and then grading each one on its merits.  For example, in the chapter on Mark, the author gives an A to the tradition that Mark used Peter’s memories for the gospel that bears his name.  But the information that Mark was the first bishop of Alexandria earns a D for lack of solid evidence.

I enjoyed this journey through ancient manuscripts and each explanation of the stories and traditions they represent.  This book would be enjoyed by anyone wanting reliable evidence of what happened after Acts.

Moody Publishers has provided me with a complimentary copy of this book in exchange for my honest review.