Emily Windsnap and the Castle in the Mist (Hardcover) 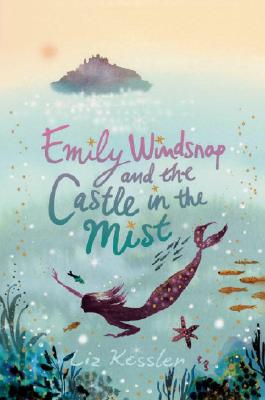 This is book number 3 in the Emily Windsnap series.

"An easy sell to girls looking for a friendship story with more than a touch of make-believe." — Kirkus Reviews

When Emily Windsnap discovers an old diamond ring during a class hunt for trinkets, how is she supposed to know that the ring is half the key to unlocking an ancient curse by Neptune himself? Now, with the ring stuck firmly on her hand, Emily finds herself under a new curse: in just a few days, she’ll cease to be half-human and half-mermaid and must say good-bye to one parent forever. Can she possibly find the other missing ring that will break all the curses? Is there anyone who can help her — before it’s too late?

Liz Kessler is the author of the New York Times best-selling series about Emily Windsnap as well as three adventures about Philippa Fisher and her fairy godsister. She is also the author of the middle-grade novels A Year Without Autumn, North of Nowhere, and Has Anyone Seen Jessica Jenkins? and the Poppy the Pirate Dog series for young readers. Liz Kessler lives in England.

Be careful," Shona whispered as she waved me off from the porthole. "And good luck."

"You're sure you don't want me to come with you?"

"I'm sure," I said. We'd agreed I had to go straight back to the castle and tell Aaron the news about tonight. There was no time to lose. Shona was going to stay behind and fend Millie off if she came looking for us.
Thankfully, she'd become so absorbed in her dowsing that she wouldn't notice anything for a while. I wouldn't have long, though. The last thing I wanted was for her to worry about me, on top of everything else. Or to keep a closer eye on me and stop me from going out tonight. That was unthinkable! I'd just have to be careful - and quick.

I swam off in the same direction, listened to the ring in the same way, sneaked into the tunnel, and finally came up in the pool in the castle's cellar. I pulled myself out of the water and sat on the side to get my breath back. Panting and exhausted, I wondered how many more times I'd be able to swim here. My body was getting weaker by the hour. My tail was getting more patchy, my breathing more scratchy. Just one more day. Please let me hold out for one more day.

A noise creaked behind me. I leaped to my feet.

"Emily!" It was Aaron! He was still dressed all in black, and his hair was tied back in a sleek ponytail; his face shone pale and clear in the semidarkness of the cellar. His smile was the brightest thing on him. "I've been hanging around here since you left," he said, softly closing the door behind him. "I was hoping you'd come back."

"I said I would." I smiled back, almost surprised at how pleased I was to see him.

Aaron took a step nearer the pool, and that's when I noticed something. His feet - they were webbed. Of course they were. He was descended from Aurora, which meant the curse affected him too. Like me, he was stuck between the two worlds, neither fully one thing nor another. More like me at the moment than ever, as he wasn't quite a semi-mer either. The brief silence that fell between us wasn't awkward. It was the silence between two people who know they understand each other without even using words. It was almost like the way I felt with Shona.

He noticed me looking and shyly held out a hand. "Come on, let me help you out of the pool," he said. This time he didn't snatch his hand away. He held it out palm up, fingers outstretched. Showing me. His hands were webbed too, his fingers joined at the knuckle by the thinnest waferlike stretches of skin. As I reached up to grab his hand, it was as though we were shaking on a deal. We were the same. Whatever happened from here onward, we would succeed or fail together.

We sat on the side of the pool. Aaron stared as my tail melted away and my legs re-formed.

"I can't even do that properly," he said. "My legs stick together and my toes flap about a bit, but that's all." He looked at me wistfully. "Just as it's been for the rest of my family, every generation."

"Aaron, we can change it," I said. "That's what I've come to tell you. Tonight's the spring equinox. And the full moon - it's at midnight!"

Aaron's eyes widened. "Tonight? This is the year? How do you know? The secrecy, the magic!"

I told him about Millie and the Orphalese Oracle. I didn't mention the fact that Millie didn't always get it exactly right. She had to be right this time. She had to be.

"I don't believe it," Aaron said again and again. "I don't believe it. Every spring equinox since I've known about it, I've hoped and wished. I've even searched for the ring myself and prayed the other one would somehow turn up."

"I can't believe I ended up here," I said, looking at the ring on my finger and smiling. I could feel its warmth smile back at me. "I know I've had a few lucky breaks in my life, among all the crazy stuff! But surely that's about as much of a coincidence as you can get."

Aaron shook his head. "It's not a coincidence at all," he said. "The ring brought you here."

"Brought me to the castle?"

We fell silent, lost in our own thoughts, and maybe in our own hopes. "Now we just have to find the pearl ring," he said after a while.

"Not just find it. We have to find it and bring the two rings together under the full moon. It'll be too late after that. As soon as the full moon's passed, I won't be a semi-mer. I'll lose the ring again."

"So do I, Emily," he said, his voice hardening.