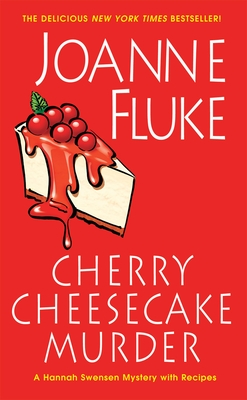 This is book number 8 in the A Hannah Swensen Mystery series.

New York Times bestselling author Joanne Fluke is back with this delicious cozy starring Hannah Swensen, as she serves up sweets to Hollywood stars at The Cookie Jar…before they discover murder is on the menu.

Hannah Swensen and her bakery, The Cookie Jar, bask in the glow of Hollywood glamour when Main Street becomes a movie set. And although tensions simmer as the cameras roll, no one expects the action to turn deadly. . .until it's too late. . .

There's no such thing as privacy in Lake Eden, but Hannah never thought things would go this far. Everyone has been telling her what to do ever since she got not one but two marriage proposals. Movie mania soon shoves Hannah's marriage dilemma into the background and even gives her cat a shot at stardom. The Cookie Jar serves as snack central with Main Street rented out for the week. She stirs lots of fresh gossip, whipping up treats for cast and crew, including demanding director Dean Lawrence's favorite—cherry cheesecake.
JOANNE FLUKE is the New York Times bestselling author of the Hannah Swensen mysteries, which include Double Fudge Brownie Murder, Blackberry Pie Murder, Cinnamon Roll Murder, and the book that started it all, Chocolate Chip Cookie Murder. That first installment in the series premiered as Murder, She Baked:  A Chocolate Chip Cookie Mystery on the Hallmark Movies & Mysteries Channel. Like Hannah Swensen, Joanne Fluke was born and raised in a small town in rural Minnesota, but now lives in Southern California. Please visit her online at www.JoanneFluke.com